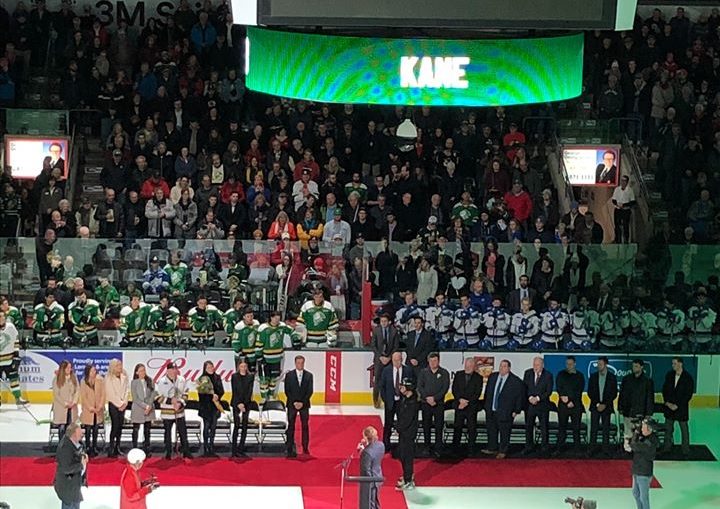 Leading up to the draft, Shane Malloy and I did a live broadcast on Sportsology. before the draft. When we were both in agreement we announced the first pick would be Patrick Kane from the London Knights. Well, a horde of Blackhawks fans booed us, they didn’t want the smaller player in Kane. Good thing teams don’t listen to their fans before they announce the pick! Here’s a snippet of the first two picks that was a historic moment, having Americans going first and second in the draft.

Columbus, OH) – The 2007 NHL Entry Draft was once again a coming-out party for American hockey players. There were 10 first rounders picked this year matching the total from 2006 and there was the record-setting moment when right winger Patrick Kane was selected first overall by the Chicago Blackhawks, and left winger James Van Riemsdyk was picked in the second slot by the Philadelphia Flyers.

Kane, who was a star in the 2006 World Junior Championship is a Buffalo, New York native, and he was more than thrilled to be selected as the first player in 2007.

After the crowd had a chance to soak in the fact that Kane was the top pick the Flyers threw the hockey community a bit of a curve when they selected Middletown, NJ native James Van Riemsdyk. The 6-3 star of two gold-medal U.S. U-18 squads had his cheering section and they chanted his name when the selection was announced.

“Yeah, that’s something that’s really amazing. It shows how American hockey has taken huge strides. It’s a big step for American hockey now. Two Americans going in the first two picks is just a complete honor and I am really happy to be a part of that.”

Photo from the Patrick Kane retirement ceremony In London, Ontario