You are here
Home > Hoopsology > Birds of Prey: The Hawks are Predators Again

Six years ago, the Atlanta Hawks took control of the Eastern landscape and finished with the Conference’s best record. Incredible team-play from the starting unit, which produced a league-best four All-Stars, led them to a miraculous 60-win campaign, despite no scorers averaging more than 17 per contest. They failed to dethrone LeBron in the Conference Finals, then slowly began to unravel.

Just three years later, none of the All-Stars were in the locker room and the team finished with the East’s worst record, falling from 60 wins all the way down to 24.

Management had built up a talented roster with several key players entering their prime, but once their window of contention starting closing, they decided to tear it all down, not wanting to waste any more time with a core whose best days were behind them. Peaking without reaching the promised land is nothing new for the franchise, which has only one championship from 1958 and zero conference titles since.

Dominique Wilkins and Kevin Willis, Steve Smith and Mookie Blaylock, Joe Johnson, and Josh Smith have all endured the same heartbreak after achieving hard-fought success. Patience had finally run out during the last peak, as ownership broke apart the roster even faster for another attempt to build it all up again.

Maybe it was time to think a little differently. Instead of matching up with the best in the East, what if they decided to build in their own way? What if they thought outside the box and broadened their horizons, forming a basketball roster with innovation and operating with a steadier hand?

That’s exactly what they did, and now another three years later since their last-place finish, the team is back in the playoff picture with a brand-new flock of stars. Management combined all their trademark attributes from history to form an ever more dangerous unit. With a 5-1 mark over the last 6 games, a record that expands to 14-5 over 19, we need to check out these new “birds of prey” and learn why the Hawks are predators again.

Over the years the Hawks have enjoyed lots of stars like the names listed above, and now it appears that with each coming era, the faces of the franchises are becoming more subtle. Dominique was the explosive “Human Highlight Reel”, then Mookie Blaylock was the rabid defender, later Joe Johnson was the cool assassin, and lastly Paul Millsap was the quiet playmaker. Perhaps the never-ending disappointment facing the team has overtime began to humble its stars, and with today’s league full of flamboyance and celebrity, how could the Hawks find a subtle superstar that could also carry lift them over the hump?

Enter Trae Young, the 6’1” 180-pound point guard from Norman, Oklahoma. Selected with the 5th pick in the 2018 Draft, the selection made after a last-place finish, Young was assigned to be the new leader of the offense in a manner similar to two-time MVP Stephen Curry, who was coming off his third championship in four years. It was the tallest of tasks for all the rookies, especially for the smallest (and squeakiest) lottery pick, but Young was more than ready to attack. He produced one of the best offensive seasons in decades for a first-year and took an enormous, unthinkable leap in his second year becoming just a 21-year-old All-Star.

Despite amazing numbers (23.6 PPG, 8.6 APG) the Hawks weren’t rising at all in the standings, until this current year with a much stronger roster and even better star. He’s not blowing people away like last year with half-court shots and mind-blowing stat lines, however, he’s producing at a higher level with better distributing and smarter shot selection. Young with good reason could be as cocky and loud as his peers, especially because he’s performing at a much younger age, yet the prodigy chooses to remain silent and deadly with his game, and that’s exactly what the Hawks front office (and fan base) had been looking for in a new superstar.

The team has also had their share of talented big men, who’ve been pivotal in generating successful seasons alongside talented guards and wings. Rebounding and rim-protection were a major ingredient to several playoff berths, brought on by Tree Rollins, Kevin Willis, Dikembe Mutombo, and most recently Al Horford for a long stretch. These big men were all great glass-cleaners and shot-blockers, yet now that the modern-day big is starting to change, where could the Hawks find new big men that’d perform well in today’s game?

The year before Trae Young was drafted, John Collins was the Hawks’ first-round pick, and he really became a cornerstone player after producing a similar leap as the point. He transformed from a traditional interior threat into an all-around two-way force, who could heavily score and block shots at all levels with tremendous efficiency for a young player (21 PPG, 58% FG, 40% 3PT, 1.6 BPG in 2019-20). Frustrated with league-average centers in the starting unit, the Hawks jumped at a great opportunity to land Houston’s Clint Capela at last year’s trade deadline, who’s an exceptional rebounder and finisher improving as the years go by (15 PPG, 14 RPG, 60% FG).

Modern power forwards should be able to stretch the floor and be quick enough to fly past the opposition, and Collins brings that for Atlanta with high-volume outside scoring and off-the-dribble finishing. Modern centers, if they can’t help space the floor, should definitely be a tag-team partner and reject players that get to the rim, and Capela’s added that for Atlanta with pick-and-roll proficiency and devastating swatting. The tall and athletic bigs are amongst the best tandems in the league and they complement each other’s game terrifically, giving the Hawks the bigs they desire for the modern NBA.

Speaking of the modern NBA…a heavy and healthy dose of 3-point shooting is an essential ingredient for winning in today’s league. The Hawks haven’t shied away from this philosophy by any means, leveraging Kyle Korver for their most recent ascent as well as other starters like DeMarre Carroll, Tim Hardaway Jr., Kent Bazemore, and Taurean Prince. Much of their sluggishness in the past couple of seasons has been pitiful shooting and overall scoring from the supporting cast, so where could the Hawks find some firepower as opposed to general floor spacers.

They first started with a rock-solid draft pick in Kevin Huerter to follow up their Trae Young selection, bringing in a discount version of Klay to join their version of Steph. He’s started most of his career games and proven to be a reliable threat (career 11 PPG, 38% 3PT). This past offseason, the front office then threw big money at two new players in order to catapult their offense. The first, Bogdan Bogdanovic, is a terrific shot-creator who’s comfortable playing in any role, and this year he’s having the best shooting season of his young career (12 PPG, 39% 3PT on 6.1 3PA). The second, Danilo Gallinari, is a sniper who’s making big impacts despite now coming off the bench (13.4 PPG, 41% 3PT on 5.2 3PA).

The three are playing excellent with the roles they are given, and none of them seem to be fazed by inconsistent playing time. Feeding the hot hand has been the key to many wins, resulting in some impressive individual performances (24, 28, & 38 points respectively), although the hottest hand might actually be underrated signee Tony Snell who’s a scorching 57% this year (on 2.5 3PA). The front office must feel relieved to have provided Young and Collins with much-needed support.

Health hasn’t been a real concern for the Hawks, who’ve been fortunate to have a long stretch of playoff berths despite not having any real superstars. Therefore, quality depth has been another element the team’s relied on across its handful of winning eras. The previous three seasons have been miserable largely because the team was so top-heavy, so what other pieces, sharpshooting aside, could the Hawks add to strengthen its roster? 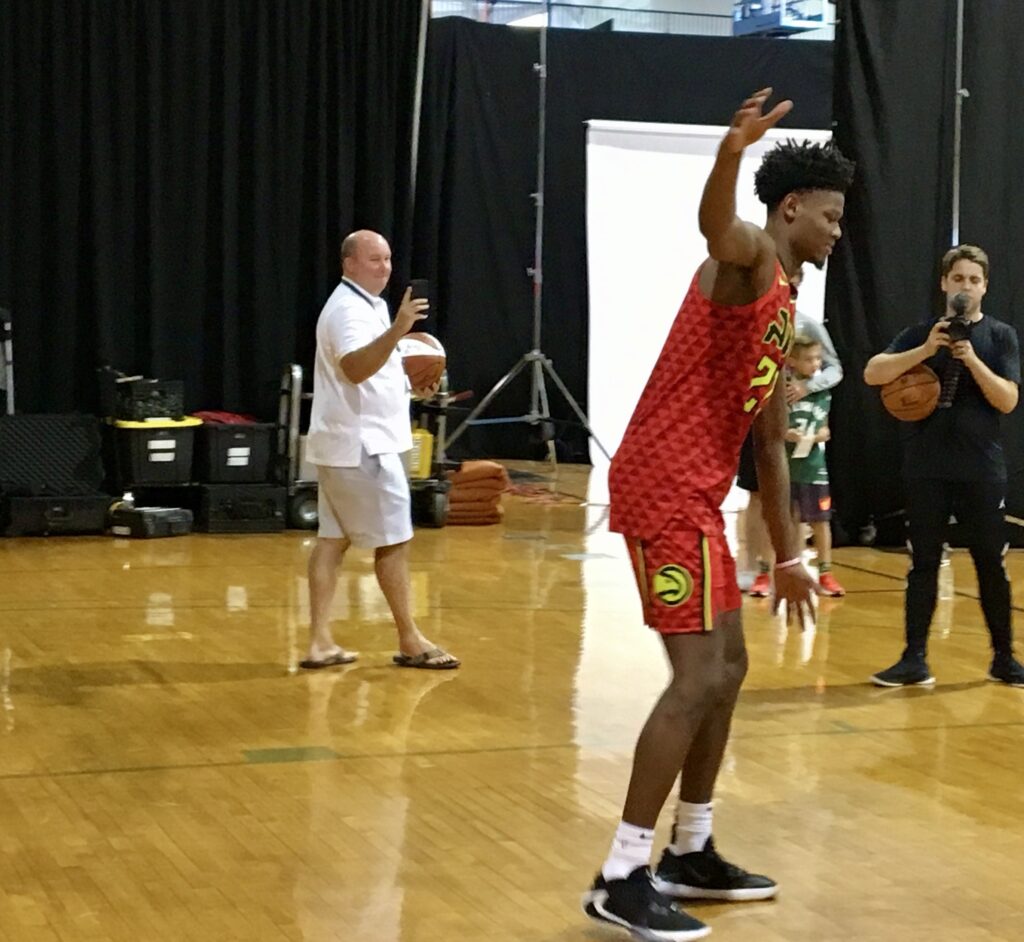 The Hawks followed their excellent picks in 2018 with two more promising picks in 2019, in De’Andre Hunter at 4th overall and Cam Reddish at 8th overall. They both came on very late as rookies and are producing much better now in their second year; Hunter has drastically improved his efficiency on offense and Reddish has looked more confident as just a 21-year-old slasher. Newcomer Solomon Hill has added some toughness and experience to the locker room, and newly acquired Lou Williams has added another significant playmaker for the bench unit.

Ironically, health issues (to no real surprise in 2020-21) have now become a challenge for the team, as we haven’t actually seen what the full roster can look like. Luckily for the coaching staff injuries are showing up in a timelier manner, meaning some players are returning right when others have gotten hurt, giving lots of contribution no matter who’s available. If the team has been great lately despite missing two starters (Reddish and Hunter), fans must be excited to see the completed puzzle, especially now that the team is more balanced.

The Hawks were set up to fly this year after a long layoff and successful free agency. The team however got off to a rocky start and put their season expectations in major jeopardy, leading to the firing of head coach Lloyd Pierce following a subpar 5-8 stretch. How could the front office salvage the year and what was the key to their turnaround?

Longtime head and assistant coach Nate McMillan was promoted to help turn over a new leaf, with a new style of coaching and different priorities. The offensive juggernaut had been rolling all season, yet the team was coming up short because of defensive lapses, which instantly became the new focus of the team. McMillian’s trademark commandment of defense, critical to his highs with Portland and Indiana, rejuvenated the young Hawks and got them on track to win their next eight games in a row.

Rim protecting from Capela, shot contesting from the wings, and the pressuring from the guards have all ramped up as of late, causing the opposition’s scoring to fall off considerably. In 12 of the team’s last 19 games, since McMillan took over as head coach, their opponents have totaled fewer points than the Hawks opponents’ season average (111.5 OPP PPG). All of a sudden, the high-powered, highly-rated Hawks offense has a stout defense backing them up, proving looking out for the rim is just as critical as looking for the open man, or bird.

The Hawks have not been to the NBA Finals in exactly 50 years; despite many prolific stars and winning eras, they’ve always fallen short to an all-time talent or team. This never-ending feeling of coming up short has led to several break-ups of quality core groups.

The most recent failure of the Millsap-Horford Hawks, which set the franchise record for wins in a season with 60, felt the most bitter for the organization, who broke apart the winning team faster than before. They decided in their next build that they needed to be different, that they had to be innovative, and ready to swarm in when the time was right.

Over the last few seasons, they’ve drafted a small point guard who many teams were concerned about, drafted an athletic big man and transformed him into a tall wing, drafted young players who were fearless, signed players with sharp skills, and scooped up one of the best centers on the trade market. They now have a punishing offense and more disciplined defense, with a promising future led by the quietest of stars.

The Hawks since the All-Star break are 12-5, tied for the most wins in the East with the co-1-seed Nets and 76ers. They’ve re-entered the playoff picture after three years of losing and still haven’t reached their fullest potential. There’s a new flock of talent in Atlanta, birds of prey with a higher ceiling than the previous era, making them a predator today, and tomorrow.