You are here
Home > Reviews > Entertainment > Doug Glatt is back in Goon: Last of the Enforcers

Doug Glatt is now a captain. Here’s a look at how that’s working out for him:

Synopsis: After one too many injuries, hockey enforcer Doug Glatt (Seann William Scott) is forced to give up his aspirations of going to the big show and settle into a buttoned down career as an insurance salesman at the urging of his pregnant wife Eva (Alison Pill). However, Doug can’t resist the siren call of the Highlanders, so he sets course to reclaim his former glory.A Jay Baruchel film, Goon: Last of the Enforcers brings back the all–star cast that made the original so funny. Seann William Scott (American Pie) stars as Doug Glatt, along with Alison Pill (The Newsroom), Wyatt Russell (Everybody Wants Some), Jason Jones (The Detour), and with Elisha Cuthbert (24), Kim Coates (Sons of Anarchy) and Liev Schreiber.

SEE IT ON SEPTEMBER 1st! 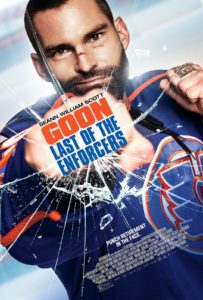