Annapolis – – The Washington Capitals beat the Toronto Maple Leafs 5-2. In the third period the Capitals had a commanding lead with 10 minutes to go in the third period. Nothing could stop them except “Mother Nature”. The lights went out and I was told it was half of the power grid for the Navy Base. Winter Storm ‘Riley’ had crippled the state the day before leaving thousands without power and once again he made himself known. 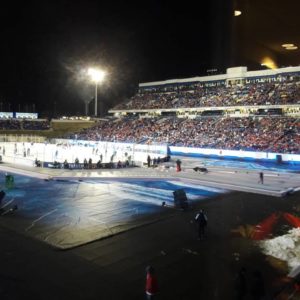 “I think we thought it was an effect at first. Like a surprise concert or a performance or something,” said Capitals forward Tom Wilson. “For the fans that stayed it was fun. They had the lights out. It’s another memory to add to a great night.”

After a lengthy delay, the power came back but NBC passed off the broadcast to NBCSN, a channel that isn’t in a lot of hotels and other places, to go to local news and SNL. That left a lot of hockey fans seeing red. Some American hockey fans were able to get the CBC broadcast, but many couldn’t, and there was four minutes left in the game.

During the pregame the pop hit “Danger Zone” by Kenny Loggins was playing on bagpipes. The movie it’s associated with “Top Gun” debuted in 1986 and Wilson was well aware of it.

“I’m not too young for that movie so I’ve seen that numerous times. It’s a classic that definitely gets the feels going,” a smiling Wilson added.

The Capitals were more prepared to deal with the elements. Both have played in a lot of outdoor games but the Leafs were out of sync for much of the game. Their defense was scrambling and goaltender Frederik Andersen was eventually chased from the game.

“Just, I mean, it was going in,” Mike Babcock stated. “And I didn’t want to leave him in there and have a bunch more go in. So he’s our guy. He’s our starter. We’ve got to look after him the best we can. Mac (Curtis McElhinney) got an opportunity. I thought Mac played good for us, gave us a chance to crawl back. We didn’t do that but he gave us that chance.”

The gold medal winning US curling team was celebrated as well as the US women’s hockey team who also struck gold (more on that later today and tomorrow).

Hats off to the fans who created the best tailgates I’ve ever seen at an outdoor game. I’ve been to quite a few and these fans were there early, and they were enjoying the weather and the surroundings.

From the aircraft carrier shaped rink to the excellent weather (41.7 degrees at puck drop) and 29,516 in attendance made this a special event. The total attendance for 25 regular-season NHL outdoor games stands at 1,313,613.

One thought on “The 2018 Stadium Series Created Some Lasting Memories”