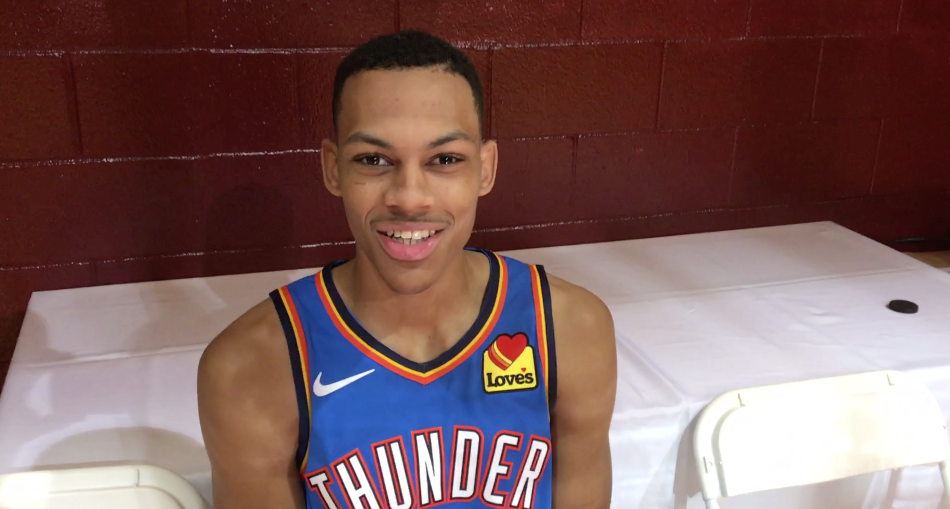 Toronto Raptors (27-45) – Can OG Anunoby stay efficient with a bigger role in the offense?

The champs from two years prior had an apocalyptic season, where they were forced to relocate due to the global pandemic and lost control of their elite defense. New center Aron Baynes (0.4 BPG was a nonexistent rim protector. 34-year-old Kyle Lowry played with less intensity without the home crowd (dipping to 1.0 SPG), and All-NBA forward Pascal Siakam appeared less engaged as the staple of the unit.

However, if the Raptors manage to have a quick turnaround, they’ll need OG Anunoby to sustain his high trajectory. The fourth-year forward is an absolute fiend of defense (1.5 SPG, 0.7 BPG) with an athletic 6’7” 235lb frame and, he can also hit outside shots (40% 3PT) when he’s not attacking the rim (48% FG), so the question is whether he can maintain his strong efficiency on both ends as his offensive workload becomes greater? The franchise legend and offensive star Lowry is likely leaving Toronto this summer, opening the floor for an up-and-coming player to develop more offensively, so him being the team’s best young player will soon have his opportunity to grow alongside two excellent playmakers in Siakam and Fred VanVleet.
OG Anunoby’s ability to maintain his strong efficiency on both ends as he enters into a bigger role in the offense will determine if Toronto can find their way back to the postseason.

Minnesota Timberwolves (23-49) – Can the star offensive trio buy in defensively?

A much-needed, mid-season coaching change energized the young Timberwolves, who were starting to make some noise as the year came to a close. #1 pick Anthony Edwards rapidly morphed into an elite scorer (19.3 PPG), D’Angelo Russell revived himself as a star playmaker (19.0 PPG, 5.8 APG), and Karl-Anthony Towns in the most difficult year of his life turned in another brilliant offensive campaign (24.8 PPG, 4.5 APG, 39% 3PT).

However, if the Timberwolves want to realistically climb the mountain, the star offensive trio will need more effort defensively. The speedy Russell, agile Edwards and muscular Towns are exceptional offensive talents, each capable of averaging 20 points per game with 3-point proficiency, so the question is whether the three stars will buy in on the other end to balance out their team’s game-plan. Fortunately, Minnesota has a long bench of athletic young talent who all showed at times they can be defensive playmakers, so the leaders of the offense, typically known for being weak defenders at their positions, will need to put their size and supporting cast together to try and build a decent unit. The star offensive trio’s will to buy in defensively and guide the rotation to play decent team defense will determine if the Timberwolves can start climbing towards the playoff picture.

Cleveland Cavaliers (22-50) – Can the young wings boost their offensive efficiency?

The second post-LeBron Cavs had another weak campaign but did make good progress building their foundation. Collin Sexton took another big leap as the franchise’s star and became one of the league’s best scorers (24.3 PPG, 48% FG, 37% 3PT), made an excellent jump as the team’s leading playmaker (17.4 PPG, 6.1 APG, 40% 3PT), and the recently-acquired Jarrett Allen took over as the future paint protector (9.9 RPG, 1.4 BPG).

However, if the Cavaliers want to start increasing their win total, they’ll need their young wings to make similar leaps offensively.
Management has brought in a nice collection of young talent but hasn’t seen strong enough play from them to capitalize while the stars are inexpensive. So the question is whether the young wings can develop quicker and support the rest of the team’s rotation. The slashing Isaac Okoro (42% FG), inside-out man Cedi Osman (37% FG, 31% 3PT), and perimeter threat Dylan Windler (34% 3PT) can all be impactful pieces that complement the franchise players but they’re all coming off horrible individual seasons, so they’ll need to each improves to keep the team moving forward.

The capacity of the young wings to boost their offensive efficiency will determine if Cleveland starts ascending the standings.

In the first official year of their rebuild, Oklahoma City carved out some foundational pieces and found they had a legitimate rising star. 22-year-old Shai Gilgeous-Alexander blossomed in the leading role despite having one of the worst units to work with (23.7/5.9/4.7), 21-year-old Moses Brown became a forceful glass cleaner (8.9 RPG in just 21.4 MPG), 20-year-old Darius Bazley spring-boarded into an aggressive playmaker (13.7 PPG, 7.2 RPG), and 19-year-old Aleksej Pokusevski made late strides as an enticing young scorer (8.2 PPG).
However, if the Thunder are going to give SGA some much-needed help, Lu Dort will need to morph into a 3-point dynamo.

The undrafted Dort has been a revelation and once again proved the genius of the team’s scouting, but while he’s a defensive force, he’s not all that skilled offensively, so the question is whether he can become a real outside threat who can complement SGA’s all-around playmaking long-term. He appears most comfortable spacing the floor although he hasn’t been very efficient (33% 3PT on 4.9 3PA for his career), and Oklahoma City will need him to improve that part of his game dramatically since he’s their foundational wing on a weak shooting team.
Lu Dort’s capacity to become a knockdown shooter will determine if the Thunder need to draft more perimeter players for the future.

Orlando Magic (21-51) – Who will be the starting point guard moving forward? After wasting the primes of their three best players, Orlando finally did a fire sale of their top talent to kick off a rebuild around guards and centers. It was a fun rookie season for both Cole Anthony (12.9/4.1/4.7) and R.J. Hampton (11.2/2.8/5.0 in 26 games with ORL), who played freely as the unofficial leaders of the offense, and it was a great bounce-back year for Wendell Carter Jr. who rejuvenated his career as a long-term interior player (11.7 PPG, 8.8 RPG in 22 games with ORL).

However, if the Magic are going to develop any sort of chemistry in the foundation, they’ll need to decide between Cole Anthony or former 1st overall pick Markelle Fultz for their starting point guard slot. Anthony despite just being 6’2” played big as a scorer, rebounder, and facilitator, who’s likely on his way to the All-Rookie team, yet Fultz held All-Star potential and had a nice postseason showing before tearing his ACL at the start of this season, so the question is whether management wants to move forward with the dynamic, confident Anthony or the dangerous, injury-riddled Fultz as the offensive leader. Orlando is lightyears away from competing and has to carefully bring Fultz back into the fold, but they’ll need to at least make one a priority to prevent holding up the rest of the team’s development. Coaching choosing Anthony or Fultz to be the main point guard will determine the offensive scheme Orlando carries in the new era.

Detroit Pistons (20-52) – Is the coaching staff going to commit to Josh Jackson?

To no surprise, the Pistons completely botched the exits of Blake Griffin and Derrick Rose, but they were lucky enough to overcome it with the play of new franchise players. Jerami Grant bet on himself and became an awesome all-around scorer (22.3 PPG, 35% 3PT), Saddiq Bey showed poise as a rookie sniper (12.2 PPG, 38% 3PT), Isaiah Stewart looked impressive as an interior threat (7.9 PPG, 6.7 RPG in 21.4 MPG), and Hamidou Diallo appeared to recharge his offensive skillset (11.2 PPG, 39% 3PT in 20 games with DET).

However, to form a consistent rotation as more prospects come into the picture, the coaches need to decide if they’re committing heavy minutes to Josh Jackson. The 4th overall pick in 2017 has had a whirlwind first four years, beginning as an inefficient yet productive slasher in Phoenix, then becoming a spark plug deep off the bench for Memphis, and last being an inside-out scorer for Detroit who only played well with heavy minutes, so the question is whether the coaches want Jackson to round out their lineup or lead their bench, or if they would just rather use his talents on a need basis. Jackson is the type of character who can be aggressive when relied upon but can also disappear when his chances are limited, so he’ll need to prove he’s committed to helping the team, or he might be on his fourth team in five years.

The coaching staff’s decision to commit to playing Josh Jackson heavy minutes will determine if Detroit wants to bet big on athleticism moving forward or if they want to be patient feeling out their prospects.

Everything came crashing down very quickly for Houston, who after trading franchise icon James Harden lost 20 games in a row and saw injuries to stars derail their season. There were only a handful of positives including rookies Jae’Sean Tate (11.3 PPG) and Kenyon Martin Jr. (9.3 PPG), the lasting player from the star swapping Kelly Olynyk (19.0/4.1/8.4 in 27 games with HOU), and big-money pick-up Christian Wood (21.0 PPG, 9.6 RPG, 51% FG, 37% 3PT).

However, if Houston is going to successfully build a new star, they’ll need their current one John Wall to facilitate the growth of Kevin Porter Jr. A recent first-round pick, KPJ arrived in Houston after a falling out with management and exploded onto the scene (including a 50-point game) as the new offensive juggernaut, but Wall earlier in the year wasted no time taking lots of shots and leading the offensive game-plan, so the question is whether Wall can be more efficient in a lesser role to ease the rapid development of Houston’s next backcourt star. Wall, rightly so, has always been a ball-dominant facilitator yet his injuries have made him even less proficient and effective, so he’ll need to understand his limitations and help Porter Jr. if they both want to recover from this catastrophic season.

John Wall’s capacity to take a step back and facilitate the growth of Kevin Porter Jr. will determine if Wall will remain a Rocket and if the team can start reviving their playoff chances.