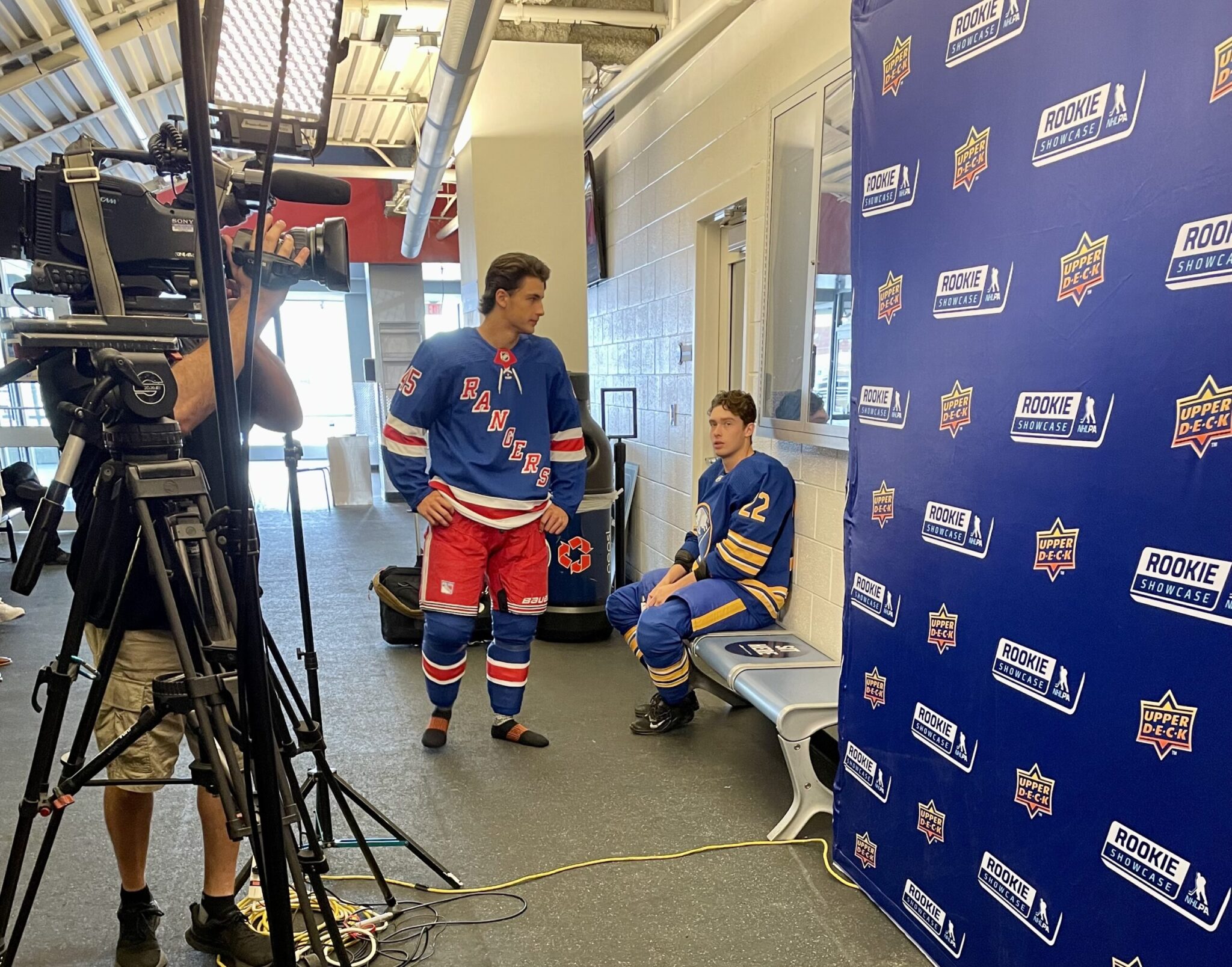 Arlington, VA – – The 2022 NHLPA Rookie Showcase is in the books. I got a lot of content thanks to the NHLPA and Upper Deck. The Guys were back, they were happy, and there was some magic in the air. One of the players who was most pumped was New York Rangers defenseman, Braden Schneider. The talented blueliner played in 43 regular season games and 20 playoff games. It was more than he could have imagined. His physical play was something that propelled him.

“Definitely. I take a lot of pride in being a guy who is good defensively and hard to play against and trying to get involved physically as much as I could. I’m not sure that’s necessarily the reason, but I think it helped. Especially as high-paced and hard the end of the NHL season and the playoffs can be,” said Schneider.

The Rangers leaned on Schneider quite a bit, and that extended to the Conference Final where he was averaging 9:51 minutes per game at the age of 20.

“For sure. I definitely wasn’t expecting to be playing as early as I did. I was very fortunate. I was happy with the opportunity I was given,” he stated.

With the season just around the corner, the young defenseman probably has a good idea of where he stands this season. What his chances are making the team right out of camp?

“No, not really. It’s good to have the experience that I was able to get under my belt, but I’m going in with a similar mindset. Maybe a little bit more comfortable and more confident. I am still working for my spot and trying to earn a full-time spot on the team.”

Rookies always learn something about their first season in the pros. Schneider is no different.

“The biggest takeaway from last season is it’s a lot more mental than it is physical,” Schneider said like a veteran. “You have to be physically fit and everything to be there, but if you don’t have the mental capacity, it’s hard to keep going. It’s a grind, and I learned a lot. I’m glad I got the experience.”

Players like to show off their first uncirculated cards to friends and family, and Schneider is no different. He didn’t hide it.

Friends and family will be the first to see it,” Schneider chuckled.

Then we talked about how his hair looked. He responded, “I came in, and I was wearing a hat. Hopefully, it’s not looking too bad. (I told him it looked good, and he thanked me)

Schneider looked like he put on five pounds of muscle this offseason. He should make the team out of camp, and that means the Rangers’ blueline will be better than last season.

Here is a shot of Simon Edvinsson, the tallest player at the shoot. BTW, stars from two draft classes of players were in attendance, so not all will be rookies this season. That’s because of the pandemic. This event was fun for the players and the media who were missing hockey over the summer.