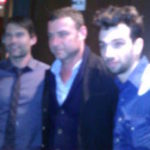 When you entitle a movie “Goon” you are certainly leaving yourself open to criticism if you base the movie about a hockey player who has that role and not back it up with some kind of authenticity, even though this is a comedy, well I am here to tell you this was very authentic.

Doug Glatt (Seann William Scott) plays a Jewish enforcer who was a fan of the game who found himself joining a team to actually play the game he loves. He wasn’t an overnight success and the movie shows that. Scott, really plays a great role considering he had no hockey background.

“No background. Nothing. My friend’s played. I played baseball, basketball and football in high school.  I went to some games, mainly to see some of the hottest girls in my school since they didn’t go to the basketball games. So that’s my background,” he said with a smile.

A hockey guy like me was really pleasantly surprised that the level was authenticity was very high. Former NHL Georges Laraque was right there at the beginning of the movie adding some realism right from the get-go and that got me into it early on.

Liev Schreiber played the part of Ross “The Boss” Rhea, a tough guy whose career is on the ropes. He looks the part and after reading the book, Goon (based on the life of Doug Smith a former minor league hockey player) he really took to the role. He didn’t know much about hockey yet he was not only believable but I was impressed with some of the subtleties of the role like knowing when to drop the gloves to fight or to sucker the opponent into a penalty. When to fight or when to try and score a goal.

The movie took on the look of the LNAH a Quebec fighting league that I’ve had a chance to see live. Director, Michael Dowse talked about attending those games as well and he nailed the excitement. Dowse, filmed the hockey scenes at the MTS Centre in Winnipeg, Manitoba.

Doug does find a girlfriend in Eva (Alison Pill) and this was a nice changeup. She’s certainly raunchy but has a certain charm to her since she wasn’t a natural beauty.  She even said at one point “I dig hockey players” but she wasn’t a “puck  bunny” and that’s important to note.

There’s a lot of great hockey humor in this movie. The Halifax goalie has a picture of his mother on his mask (a great idea and the picture was of the actor’s real life mom), the top draft pick was mean to Doug, even though he was there to protect him so he could score goals. His name was Xavier LaFlamme (Marc-Andre Grondin) and he got such a bad attitude at one point he actually spit on the team’s logo in the locker room. Doug cleaned it up showing his character.

At one point the coach, Ronnie Hortense (Kim Coates) clearly at the end of his rope gives the star player’s “A” to Glatt and says to the other player he’s taking that away from him “unless the “A” stands for a-hole”.

Jay Baruchel (Million Dollar Baby, She’s Out of My League, Tropic Thunder) and Evan Goldberg (Pineapple Express, Superbad, The Simpsons) wrote this move and Baruchel plays a raunchy hockey host of a show called “Hot Ice” says some great one-liners in the movie and his passion that he displays in the movie extends beyond the big screen. Even in the “lugi fight” (I wonder who had that experience in real life), was brilliantly done and was hilarious.

“We have made something that causes a lot of peoples sphincter’s to clench,” Baruchel said. “Yes, it’s a f-ing love letter to them. I grew up in a house where we idolized and respected these guys. It comes from a reverential place.”

The Halifax travel bureau might take exception with the way that the city is portrayed but hey it’s all in good fun. The Highlanders radio announcer is very irreverent and he had a great line in the movie after “Oh Canada” was butchered.

“Well that was borderline treasonous,” he said.

This Magnolia Pictures movie will go down as a classic. Even the “Hanson Brothers” loved it and since they have the #1 hockey movie off all-time that’s high praise.

“We think this has the potential to be the second best hockey movie of all-time,” said Steve Carlson, who actually coached Doug Smith in the AHL while playing for the Johnstown Chiefs.

Eugene Levy (too many credits to mention) has a small part but somehow plays a very believable Jewish dad. LOL