Another day and some new wrinkles. Check out my Instagram to see them.

Tyson Foerster – C – With more intensive skating drills going on, he shined. His cornering is really improved. You can tell he worked really hard over the summer.

Linus Hogberg – D – He was another one who showed off his skating. He was the best of his group. His first pass was improved as well.

Mason Millman – D – We know he has to get physically stronger BUT he was making nice stick plays on drills. He does everything he can to make up for it. Cole Perfetti believes in him and so do I. His offense is already there

Connor McClennon – RW – Continues to impress and he scored a nice goal on Samuel Ersson.

Cam York – D – He does everything well. You expect that from him in this type of camp. Let’s see how he does 3-on-3 and we won’t know until Flyers training camp how eager he is to win puck battles. That’s his biggest weakness currently.

Elliott Desnoyers – LW – The coach who would give some slight push back to the players before they tried to score gave up on Desnoyers. He couldn’t keep up the pace. Desnoyers shook him easily. He may be the most elusive player there.

Morgan Frost – C – I still think there’s a chance when he’s called up again it’s as a winger. It depends on the personnel. His passing was perfect, and his shot now has pop on the pads. He was in the gym every day in the offseason rehabbing and that added more power to his shot 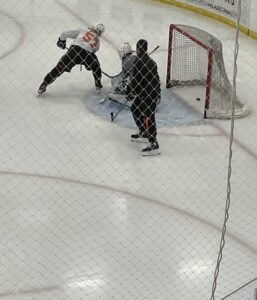 Wade Allison – RW – The release on his shot was terrific. You can see that in my video. His skating is improved as well.