The Flyers prospects were on the ice, and I was there to see them.

Samu Tuomaala – RW – I’m always an easier judge at the beginning of camp rather than the end of camp. I think he needs to be more engaged along the wall and in puck battles. The speed and passing were all on display so let’s see how he adjusts to North American hockey in the framework of this camp.

Connor McLennon – RW – Nobody saw a lot of him in the AJHL, but they did in Winnipeg in the WHL. McClennon can make a good, accurate pass but, he was having trouble with his stick and puck control. That’s something he needs to work on. There are some tools here.

Elliott Desnoyers – LW – He looked fast, and he caught my eye with his passing. He can make a tough pass look easy. 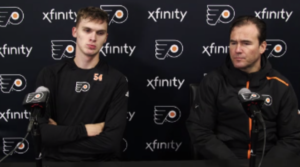 Egor Zamula – D – He’s picked up where he left off last season. His reflexes on defense are the fastest in camp. He can go down to block a shot and get up even faster than last year. His offense is top-notch. Zamula said he was in the workout room so much that he “slept” in there. It was a funny moment.

Tyson Foerster – C – His speed and stick handling are improved. Jackson van de Leest, a camp invite who is 6-7, 238, was being tested physically by Foerster a few times. It was good to see.

Jackson Cates – C – He was trying to set up an offensive give-n-go in a drill with Morgan Frost. They were chatting before it was their turn, and they almost converted it. No other players were doing that, and those are the little things Cates does.