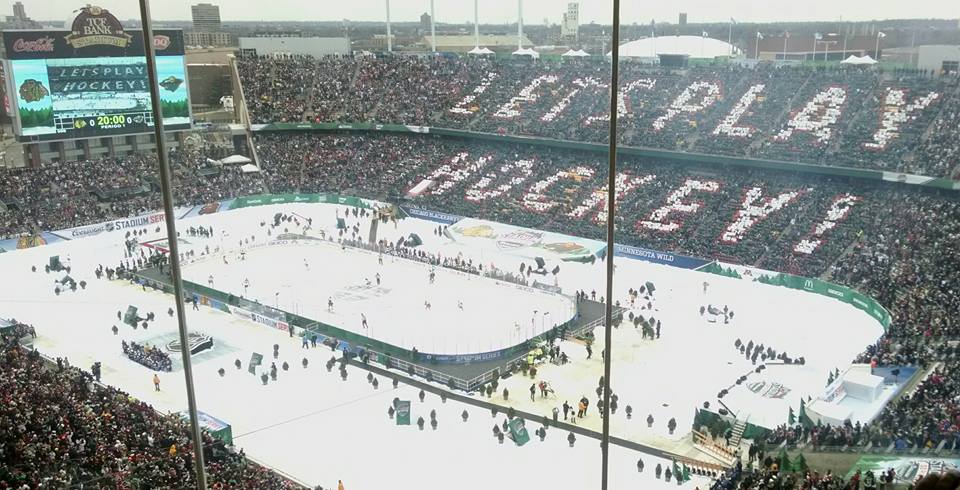 In the NHL’s 20th outdoor game since 1957, hockey’s Midwest roots prevailed over its Midwest trophies as the Minnesota Wild defeated the Chicago Blackhawks 6-1 in front of 50,462 fans at TCF Bank Stadium this afternoon. In perfectly balmy 36 degree weather, the home squad became only the 5th hosting team to win an outdoor game since 2003.

The State of Hockey home team was more than jacked up for this game at the starting horn, putting shots on goal within the first five seconds of puck drop. A blocked shot by the Wild defense turned into a quick transition breakaway for center Ryan Carter, who was stoned twice by Corey Crawford before Matt Dumba followed from the blue line for a 1-0 lead. The 21 year-old defeseman from Calgary, who had an eye black design similar to that of the Ultimate Warrior, followed his goal with a hard check in front of the Chicago bench. Hard retaliation by Phillip Danault lead to double minors for the Hawks instead of coincidental penalties with Dumba. With seven seconds left in the powerplay, Gopher almni Thomas Vanek put the Wild ahead 2-0 with his 17th tally of the year.

“In the football locker room..looking down the list of guys that use it in past in the NFL.” Dumba said about his eye black. “I got a little crazy with it…my inner Ray Lewis but it was fun.”

After a spirited three song set by 2016 Rock and Roll Hall of Famers Cheap Trick, the snow globe conditions at TCF Bank Stadium subsided and the Minnesota onslaught continued. One of the prettiest tick-tac-toe goals I’ve seen this year was at the 2:26 mark of the 2nd period when Jason Pominville behind the net found Erik Haula in the near left slot. A one-time pass finding Nino Niederreiter for a one-time shot in the right crease put Minnesota up by three. Exactly 8 minutes later, the same line combined again for a 4-0 Wild lead. With less than five minutes left in the period, an incredibly controversial call added insult to injury for the Windy City. Hawks Defenseman Michael Rozsival was called for a major interference penalty plus game misconduct for a seemingly legal collarbone hit on Minnesota’s Jason Zucker.

“We still realize the battle we’re in.” Patrick Kane said yesterday while addressing the Blackhawks one win over four games coming into today. “It is a great event and I don’t think we’re keeping track of our record in outdoor games.”

It was Hockey Weekend Across America, and the home team during the 2nd intermission honored it’s best, from the National Champion University of Minnesota women’s hockey team to North Stars great Neal Broten, to NHL Hall of Famer Phil Housley. As expected, the Blackhawks made a goalie change to Scott Darling for the final period. Just over 2 minutes in the final frame, a nifty backhand by Ryan Carter gave the home boys a five goal lead. An uncovered Kane on the left side goal line scored his 35th this year from a wide shot off the boards by Trevor Van Riemsdyk. Number 88 assisted another goal almost 90 seonds later, being guilty of a breakaway penalty against Erik Haula in front of an empty net.

“Torch (new Head Coach John Torchetti) said that would be the easiest goal I would ever score…I’ll take it!” Haula said on the podium after Jason Zucker and Ryan Suter were interviewed with their kids. Four year old Brooks Suter was pretty straightforward with his favorite part of the day.

SPORTSOLOGY 3 STARS OF THE GAME