You are here
Home > Hockeyology > Mikko Rantanen Is Reaching His Potential

Mikko Rantanen was drafted 10th overall in the 2015 NHL Entry Draft. A few teams were linked to possibly drafting him but he ended up with the Colorado Avalanche. So far this has been the perfect fit for the talented right winger. 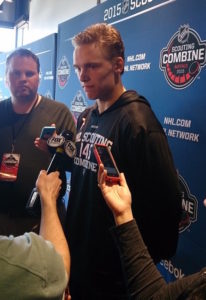 Now 21, it turns out that a full season with the San Antonio Rampage back in 2015-16 was exactly what he needed to become, bigger, faster and stronger. He was 6-4, 183 pounds the year before he was drafted. He bulked up to 211 at the combine. He looks more like 220 when you see him up close. If you’re an opposing defenseman, good luck covering him. He scored two goals against Chicago’s Duncan Keith. He played very physical against the Flyers and he was fine with that.

Last season he had a terrific 20-goal season. He was one of the best players on a bad team. 38 points wasn’t the best total for him but the fact that he was scoring goals showed that his talent shined through in the worst of circumstances. This year he looks like he’s taken another jump in his continued development. His catch up speed to make plays in the defensive zone wasn’t there a year ago.

In his first 14 games this season he has 12 points. That’s just two points behind his linemate, Nathan MacKinnon. His 17:56 time on the ice is impressive. His 62.5% face-off percentage is unexpected (20-32). One thing is certain, he’s a big reason the Avalanche have been able to hold a potential playoff spot so far, this season. A win in Philadelphia showed off his skills and the shootout winner to go along with an earlier power play goal.

“It was a great road game for us….It was an exciting game,” said Rantanen.

Last season Colorado was 9-30-2 on the road. They have three wins already so chances are the team will do a lot better this year. Some think the team will sink now that they’ve traded Matt Duchene. Rantanen already anchors the top line and soon when Tyson Jost comes back from injury that helps sure things up for them up the middle. In the meantime, they’ve improved their defense with the acquisition of Sam Girard.