He hails from Delaware and so far, his record is (6-1-0) which makes him the #1 ranked Pennsylvania Amateur Bantamweight. At 5-5, 135 pounds he’s been around boxing and wrestling his entire life.

“I started when I was about eight-years-old. I come from a big wrestling family,” Davis said.

He never had any thoughts about trying out for WWE or any other wrestling outlet even though he’s been around that a lot in his life.

“I like the competitive aspect of MMA over the showmanship of WWE,” he answered. “I just love going out there and being a mixed martial artist.” 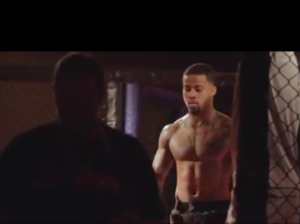 His pre-fight strategy is a lot simpler that I thought it would be.

Boxing used to be a lot more popular but those athletes don’t compete as much in a calendar year.

“We usually have 4-5 fights a year. I think it has to do with our mentality,” he said with pride. “I think in boxing it’s more about the record. In my opinion we’re more about getting more experience and appreciating the fighters a lot more.”

Like most athletes there was one special moment where he knew he’d made it.

“In one of my first big fights it really hit me that I’m really going through with my dream. I’ve always wanted to be a part of this.”

Social media has added an element of distraction to athletes lives. Davis has learned how to combat that.

“I shut it off in the afternoon. That’s really funny. Me and one of my friends are always talking about that. I get texts like ‘Are you ready’ or ‘Can I still get a ticket?’. Those are the two most annoying,” he joked. “I shut it off at 12PM. Get my mind right. I warm up. I actually do a 3-minute round warm up with one of my teammates. Basically, a pre-fight.”

You are what you eat is a phrase that’s very important to a professional athlete. Here’s what he does the morning of a fight.

“What I do is eat big in the morning. A full breakfast and throughout the day I’ll eat all fruits so I stay hydrated. A lot of water and Pedialyte,” Davis stated.

When his work is done he’s always looking for a good meal late at night.

“That’s the first thing I look for after my fight is where can I get some good food?” Davis said. “Post-fight I can eat what I normally eat. For a week and then I go back on my diet. I like to eat burgers and wings. And then I can go out and have some fun.”

His next fight will be announced in the coming weeks.

“My next big fight we’re looking at September. We’re just setting up a location possibly for Maverick MMA that’s in Pennsylvania (it could be somewhere between New Hope and Lancaster). I’m looking to fight the #1 guy in Ohio,” Davis announced.

Once he announces it we’ll update this article as well.