I have never written about Motorcycle Racing. I’ve watched it once or twice. I know of its existence, and recently I got an e-mail that caught my eye. Here’s what it said:

The fastest form of motorcycle racing in the U.S. is coming to New Jersey Motorsports Park in Millville from September 11-13 when MotoAmerica brings five classes of high-speed road racing to a racetrack that is always a fan and rider favorite. Led by the fastest of the fast on 190-mph Superbikes, the MotoAmerica Superbikes at New Jersey event will be round six of the nine-round 2020 MotoAmerica Series.

Currently, in third place overall and looking to continue his success, 19-year-old Freehold, NJ native Brandon Paasch is set to compete in MotoAmerica’s Supersport class. Paasch won the 2016 MotoAmerica KTM RC Cup, was the first American to race in the MotoGP Moto3, the first American to qualify for a Junior World Championship race, and was a frontrunner in the 2019 Daytona 200.

I’m based in New Jersey, so I thought, hey, this is a local guy, let me talk to him and see what he’s all about. The first thing I wanted to know is how he got where he is today.

“I grew up on a farm in Freehold. We adopt horses and stuff. My whole family is very into motorsports. My uncle used to race professionally, so I started racing dirt bikes when I was three or four years old,” Paasch revealed. “I learned how to ride when I was about two or three with training wheels on the farm and just slowly progressed.”

He was on an upward arc for sure.

“When I was 14, I did my first race in Europe. One race. I got beat badly and I was like I need to hone my skills a bit. Went back the next year, finished third, then second and second again,” he stated. “In 2016, I came back to America, I was 15, I wound up winning the overall championship with MotoAmerica in the KTM Cup, and I did it in New Jersey. That was the last time I did a full season in America.” 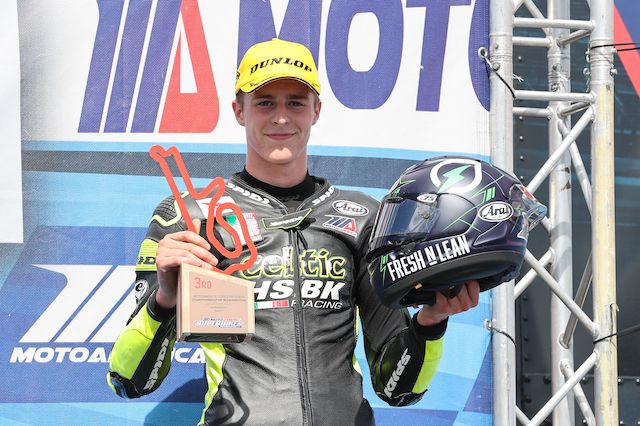 Now he gets to perform in front of fans, something the NBA, NHL, and MLB are unable to do at this time.

“We still have spectators; the number is cut down. I don’t know what it is…A lot of people are saying it’s a lot of pressure. It’s a good kind of pressure and I just want to be able to do it in front of my home spectators,” the New Jersey native said. “I enjoy that. Afterward, I can hang out with the people and take photos.”

He’s been traveling, mostly driving, and hasn’t done much of anything but getting ready for the next race,

“When I get back to the hotel I’m always studying.”

High tech stuff isn’t prevalent in all races but Paasch envisions isolated cameras fans can watch on, and I brought up drone cameras and he liked that idea.

“We’re still progressing as a sport,” he admitted.

He’s an interesting guy. I guy to watch for sure. As a spectator, you can get into a sport that’s starting to grow, and that’s the best way to be a fan. He’s the kind of athlete I like talking to and watching because he’s all business, but he appreciates his fans and how he got there. Remember, he’s in charge of all the expenses, so he has to win money, or he can’t do all of this