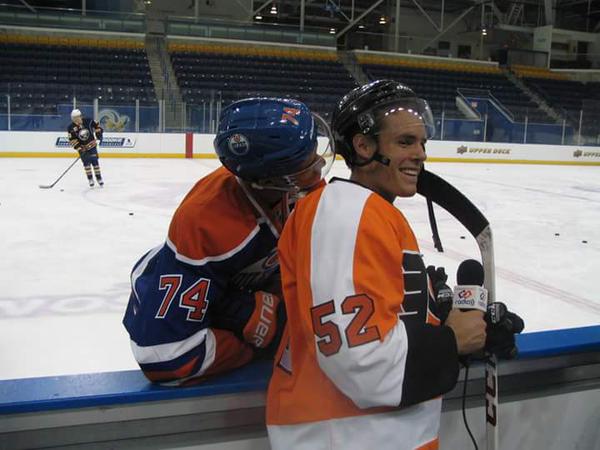 So what’s the difference between Nick Cousins NHL play this year as compared to last year? It’s the coach. Last year Cousins never found a role and was piece-mewled into the lineup. This year in Dave Hakstol’s system he’s found a role, agitator, puck mover, and shootout specialist.

“Any players hopes are to play in the NHL,” Cousins said last summer. “I’ll try to make the team out of camp but if I don’t I’ll go to Lehigh Valley and continue to work on my game. Hopefully if I don’t start out there. I’ll end up there.”

In 32 games he has 6 goals and 9 points. One is a game-winner but his worth to this team is more than what’s listed in a statistical column. He’s a guy who keeps the locker room loose and he’s added to the team speed that was lacking earlier this season.

The Flyers have historically been a bad shootout team. Lately they’ve added some better shooters to their arsenal and Cousins is one of those guys. Having excelled in junior hockey with the Sault. Ste. Marie Greyhounds, and recently with the Lehigh Valley Phantoms; Cousins has brought a new energy to the formerly near death experience for Flyers fans and the results were an important win against Washington. On the season he’s 2-4 in the shootout.

“Nick shot first for us I think the last three or four shootouts. You saw tonight he’s got great ability and that calm poise when he’s in that situation.  He’s the right guy to go into that spot,” said Flyers coach Dave Hakstol.

The Belleville, Ontario native has had good chemistry with Sam Gagner on his right and Matt Read to his left. As a center his face-offs have been decent at 45% a slight improvement over last season as well. At the age of 22 the 3rd round pick in 2011 is turning the corner.

Young players have to be patient but maximize their opportunities. They only get a certain number of kicks at the can. He’s now a plus player. He gets an occasional sniff on the power play and his minutes have increased slightly as the season has rolled on.

In the Flyers recent win over the Ottawa Senators Cousins was jawing at a lot of their players. He got them off their game. He take one minor penalty but that’s going to happen from time to time.

He’s only 5-11 but he doesn’t shy away from contact. He’s the kind of player teams need. Players love him and fans are certainly getting to know him.