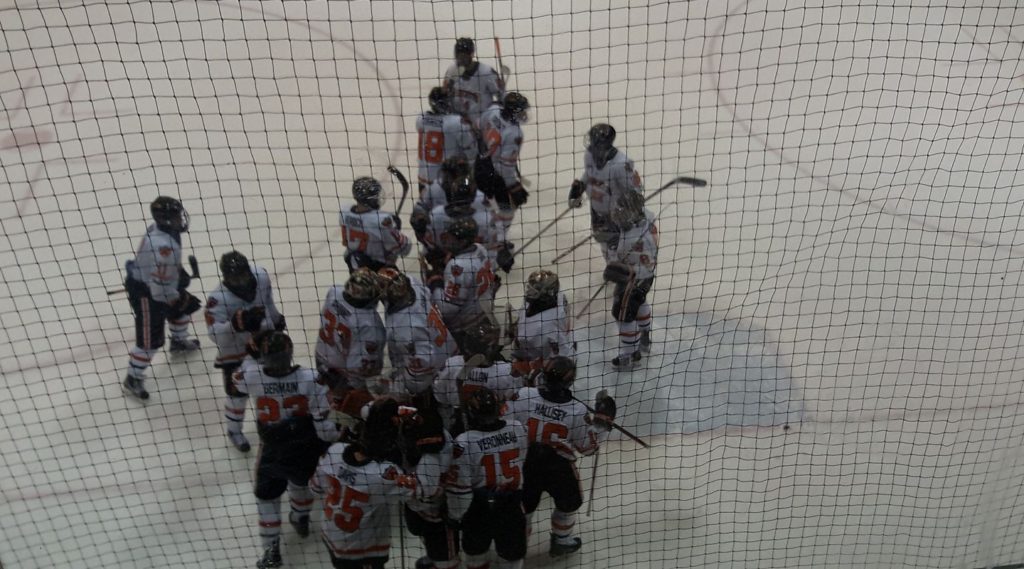 Princeton – – In a thrilling three-game series at Baker Rink, here are some players I really liked.

Eric Robinson – Junior – 6-2, 200 – LW – He skates well and enters the zone quickly. Sometimes to fire off a hard wrist shot and other times looking to make a good pass. He will take a hit to make a play. Has good stick and puck skills. Good one-timer. Had a goal and two assists in the series.

Max Veronneau – Sophomore – 6-0, 180 – RW – He has really blossomed this season (34 points in 31 games). He has excellent speed. He scored the game-winner on Saturday night (just put the shot on net from an impossible angle) and had a nice assist on Sunday. He knows how to control the puck along the wall. He layed a nice hip check in the offensive zone. He needs to get stronger. He has a great chance of getting signed by an NHL team when the season ends.

Josh Teves – Sophomore – 6-0, 180 – LD – His gift is his ability to get the puck up the ice. He’s not the fastest skater but he finds the seams to get the puck into the offensive zone. He has a good first pass. His backward skating is excellent. He can really freeze the puck in the corners and win battles with good strength. He had a key assist on Saturday.

Jake Kulevich – Senior – 6-4, 215 – LD – captain – He was impressive. His goal on Sunday was a great wraparound that came off hard work. He has sneaky speed. His clears are smart and safe. He has a solid first pass. He’s good on the PK. He knows how to get out of trouble in his own end. He has an excellent chance of being signed by an NHL club.

Jacob Panetta – Freshman – 5-11, 192 – RD – He’s already playing on the top pairing. He has good speed up the ice with the puck. He needs to keep his head up more often. He did get creamed on a hit during the series. He has excellent puck retrieval skills.

Jared Cockrell – Freshman – 5-11, 180 – LW – He had three assists in the series. Played on the second line. He’s effective on the PK. He really works well off the cycle.

John Snodgrass – Freshman – 6-0, 185 – RW – This guy can play. He was in on a lot of plays but didn’t get any points. He works well in traffic in the offensive zone. He saw some power play time and made solid passes. Tenacious on defense. Got in the goalie’s face in the crease to make things happen offensively. He was an unsung hero.

Tim Harrison – Senior – Calgary – 6-3, 205 – RW – He had three assists in the series. He wore the “A”. He has an excellent wrist shot. Decent speed. He was solid on the PK. He got to the puck quickly and made smart clears. Took 1 dumb penalty. The Flames have until August 15th to sign him. I’d imagine he’s high on the list of priorities for them.