“Red was perhaps the most literate sports announcer I ever met.”-Vin Scully 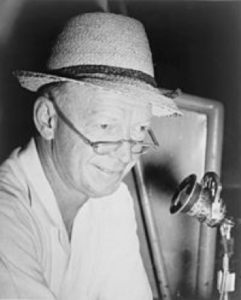 In my early and middle years of writing sports book, I called on Red Barber to blurb them. He never failed. He along with Mel Allen those long ago summer  nights spun the tales of New York City Baseball and hooked me on one day writing books about the sport.

Red Barber was one of my inspirations – listening to him spin the story of Brooklyn Dodger and then New York Yankee baseball, made me love, understand the game, and write about it. He always came through. I am in his debt.

This profile is for you “Red.”

Walter Lanier “Red” Barber passed away at the age of 84 from complications after emergency surgery on October 22, 1992. His 33-year career as a play-by-play broadcaster had many acts, most notably as the top man announcing Brooklyn Dodger baseball for 15 years and then as part of the Yankee team with Mel Allen for a dozen seasons.

The “Old Redhead,” the pride of Brooklyn, had his relationship with “Dem Bums” severed when he was fired or resigned in 1953. One story circulated was that Barber’s outlandish salary demands triggered his departure. Another was that he was too critical of the team at times in his calls. No matter.

The Yankees scooped him up quickly and paired him with Mel Allen.   The two men had contrasting styles but they worked well, even complemented each other even though their personalities, approaches, were very different. Allen was hot, and Barber was cool. Both would be the first broadcasters inducted into the National Baseball Hall of Fame’s broadcasting wing.

The main man on the Yankees and principal broadcaster was Mel Allen, the most famous sports announcer anywhere.  Barber’s role was pregame and postgame shows on televised home games, working a few innings of play-by-play. He traveled with the team occasionally. Despite the down-sizing, the soft-spoken southerner accepted his role.

“Mel,” Barber said, “accepted me as an equal, He could not have been nicer to me either then or all through the years we worked together.”

When Barber joined the Yankees, many of the colorful expressions he had used broadcasting Dodgers games belonged mainly to the past: “Oh-ho, Doctor!” (Wow oh, wow!), the home run call – “Back, back, back, back, back, back.” He was more restrained, more objective, highly accurate, even though he was no longer the “main man.”

In 1966, the Yankees were owned by CBS and were a dismal last-place team. During a home game on Thursday, September 22, the first for CBS executive Mike Burke as team president, only 413 fans were scattered around the huge ball park. It was a makeup game against the White Sox that most thought would be rained out. The TV cameramen were under strict instructions from CBS media relations not to transmit images of foul balls into empty seats. Red Barber, truthful to a fault, described the scene on air. A week later, Red Barber was invited to a breakfast meeting. Burke snapped out the news the legendary announcer would not have his contract renewed for 1967. In the space of just a couple of seasons, two incredible baseball announcers were let go by the Yankees. It was a sad time for those who appreciated the great narratives of Yankee baseball they had provided.

PAUL DOHERTY: Mike Burke inherited the Red Barber situation, a situation made apparent long before this ill-attended game versus the White Sox. Dan Topping (who had just sold his interest in the Yankees completely to CBS) left it for Burke to deal with as Red’s option was coming due at the ’66 season’s end.

A non-renewal of Barber’s contract was also pushed by the head of broadcast for the Yankees, Perry Smith, a former NBC executive and a big Joe Garagiola backer (Joe Garagiola had joined the Yankees as Mel Allen’s replacement for the 1965 season). Red’s bitterness over former-athletes-as-announcers did him in, nothing else. His testiness on air with fellow broadcasters Garagiola and Phil Rizzuto won him no fans within the organization, let alone with his fellow announcers and Smith.

Nevertheless, the “Old Redhead” kept busy in the post-Yankee years, authoring seven books, many articles and reviews, serving as a voice in a few documentaries. In 1981, he joined National Public Radio’s Morning Edition as a regular commentator.

Walter Lanier Barber had quite a run broadcasting 13 World Series, 4 baseball All-Star Games, hosting so many other major sports events. He was there when Jackie Robinson broke the color barrier in 1947, when Roger Maris hit the 61st home in 1961, through all the marker events before and after those.

RED BARBER: I worked day and night to learn my business and I respected it to the end. I didn’t win 20 games or hit .350, but I worked harder at my trade than any announcer I knew about.

About Harvey Frommer:  One of the most prolific and respected sports journalists and oral historians in the United States, author of the autobiographies of legends Nolan  Ryan  Tony Dorsett, and Red Holzman, Dr. Frommer is an expert on the New York Yankees and has arguably written more books, articles and reviews on the New York Yankees than anyone.   In 2010, he was selected by the City of New York as an historical consultant for the re-imagined old Yankee Stadium site, Heritage Field. A professor for more than two decades in the MALS program at Dartmouth College, Frommer was dubbed “Dartmouth’s Mr. Baseball” by their alumni magazine.

“As a lifelong Yankees fan, I was devouring every last delicious new detail about my beloved Bronx Bombers in this fabulous new book.” —Ed Henry,  author of 42 Faith: The Rest of the Jackie Robinson Story