Robert Thomas and Jordan Kyrou will soon play together in the Traverse City Tournament. Before that begins they were both at the 2018 NHLPA Rookie Showcase having fun.

“There’s a lot of good players here whether you play against them in juniors or world juniors or preseason games so it’s nice to see them,” Thomas said, with a hockey smile.

Thomas had 75 points combined between London and Hamilton last season in just 49 games. He had 32 points in 21 games in the playoffs for Hamilton, short of winning another Memorial Cup (he won in 2016 and lost in the semi’s last season), there’s not much left for him to do at the junior level. He just turned 19 last month so that’s tricky.

Thomas has a fun personality. At 6-0, 192 pounds he can be a handful in the dirty areas as well.

“In the corners, I’ll hit a little bit. I actually haven’t been chirped about it yet,” Thomas revealed. “Kyrou is an unreal player. Everyone watched him tear up the OHL this year with his speed, hockey sense, and skill.” 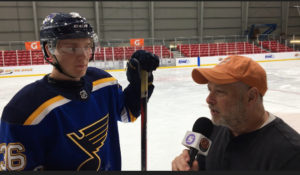 Thomas was there to get his photo taken for his first hockey card and he believed his would be better than Kyrou’s.

Jordan Kyrou was the OHL MVP. He had 109 points in 56 games for the Sarnia Sting. He’s 20, so the chances of him sticking are better. He’s already played one AHL game.

“Maybe he’s better looking in pictures,” Kyrou said smirking. When I replied that you get more points and that’s what matters, Kyrou concurred and then cracked up.

Kyrou was drafted by the Blues in 2016. He was taken 35th overall. That pick may be one of the best the Blues have ever made. Thomas was drafted 20th overall in 2017. He looks like a man among boys in the OHL. Could both of them be headed to St. Louis this season? Kyrou did get a goal in a preseason game against the Penguins last year in the Kraft Hockeyville game.

“I continued to get bigger and stronger this summer,” Kyrou added.

Both of these players won gold medals for Team Canada in the 2018 World Junior Championship. Both are centers. If both made the Blues roster, Kyrou would likely play on the wing since they’ve added a lot of talent up the middle. Thomas? He might move out one of the pros in the top nine.

“The game keeps getting faster and faster, so I tried to work on my explosiveness,” said Thomas.

Blues fans have to be excited. At some point with the addition of these two future stars their Stanley Cup hopes are definitely getting closer than ever before.