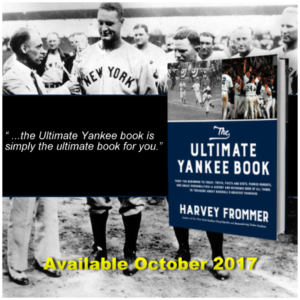 Apocryphal:  Story or statement of doubtful authenticity, although widely circulated as being true.

Born George Herman Ruth on February 6, 1895 in Baltimore, as the story got around, was an orphan. That was not true. His mother died when he was 16, and his father when he was in the big leagues. For almost 40 years, the Babe thought he had been born on February 7, 1894. Only when he applied for a passport to go to Japan in 1934 and had to produce his birth certificate did he realize an error of one year had been made regarding his age.

The error became one of record in 1902 when Ruth’s father gave his son’s incorrect birthdate date and year when the boy first entered St. Mary’s Industrial School in Baltimore.

Yogi Berra never was paid for the character Yogi Bear even though it was obviously named for him.

According to Marty Appel: “Red (Patterson) never got hold of a tape measure; he walked it off with his size 11 shoes and estimated the distance.”

The popular perception is that Joe DiMaggio was a Yankee centerfielder for 13 seasons, His tenure was actually for 12.5 seasons. In 1936 the Yankee Clipper started 54 times in center field. After that he made at least 113 starts almost every year for the remainder of his playing career aside from 1949. Injuries limited him to just 76 games. Service in WWII 1943-45 cut into his playing career.

After DiMaggio retired, Mickey Mantle became the next longest serving center fielder. However, “the Mick” was not exclusively a centerfielder. In his rookie season of 1951 DiMaggio was still there. The Commerce Comet played 84 games in right field and three games in centerfield.  From 1952 for the next 15 seasons the Mick was fixture as the Yankee centerfielder.  In 1967, Mantle moved to first base for his final two seasons.

Bernie Williams was not the regular center fielder until 1993. He actually played from in 1991-1992, but that was part-time. The graceful Williams manned centerfield through the 2005. His 16th and final year as a Yankee in 2006, he splitting time between left field, center field and designated hitter.

“”I took the two most expensive aspirins in history” has gone down in history as one of baseball’s most famous quotes.” It is untrue.

Technically Gehrig’s streak began a day earlier when he pinch-hit. The next day he was positioned at first base and his long tenure began – 2,129 straight games. Back in those days a mild headache would never keep a player out of a game. They played on through pain and injury. That, in fact was what the Iron Horse had to do to set his record consecutive games played.

Introduced in 1921, the Curtiss Candy Company claimed that it was named after Ruth Cleveland, the late daughter of ex-president Grover Cleveland. That “naming” claim a legal ploy allowing Curtiss to name the candy the Babe and not getting his permission. Diphtheria actually claimed Ruth Cleveland at age 12 in 1904, 17 years before “Baby Ruth” candy bar was introduced when the Sultan of Swat was in his prime time years. A P.S. to the confection is that it originally

was named “Kandy Kake.” The name was changed after George Herman Ruth became the star of stars

The story was that Joe DiMaggio wanted a monument in his honor at Yankee Stadium, one to take its place near other immortals in Monument Park.

In the 1990s, George Steinbrenner approached the Yankee Clipper and told him of his plans for a monument to DiMag.

He didn’t want the honor until after his death. Joe DiMaggio died on March 8, 1999. His monument was unveiled April 25 of that year.

Jim Hunter’s nickname was totally fabricated by A’s owner Charlie Finley, who invented a story for the media about Hunter catching fish in the backwoods creeks of North Carolina and was dubbed “Catfish.”  Truth be told, the name was briefly applied to a very young Hunter when he caught a catfish.

PAUL DOHERTY: Bob Sheppard was the Yankees public address announcer from Tues April 17, 1951 through his last game in the Stadium on Weds September 5, 2007, an unparalleled 57 seasons. Although Sheppard never returned to the Stadium after September 2007, starting in 2008 the Yankees played a recording of Bob introducing Derek Jeter, the well-known “Now batting for the Yankees, Number 2, Derek Jeter, Number 2.” Hard as it may be to believe this was the first time Bob ever introduced a batter by saying “Now batting.” It was a true urban legend, used in countless Sheppard impressions for years, that Bob introduced batters with “Now batting.” Well, until the pre-recorded Jeter announcement, Bob never uttered such a phrase. He announced pinch hitters with, “Batting for X” but never using “now.” When a batter came to the plate for the first time in a game the intro was always the same, “Number. Name, Position. Number.” For 57 seasons. When a batter came to the plate for subsequent at bats Bob’s introduction template was reduced to (post-1966, he only announced first at bats through the end of ’66). “Position. Name.” Period. Supposedly when Bob was recording at his home the special Jeter intro he decided to add “Now batting” to it since this was a unique “one-of-a-kind” introduction that needed to fit a Jeter at bat whether he was playing shortstop or DH or he was pinch hitting. But Bob never uttered that type of intro before…no matter who you heard impersonating Bob before the 2008 season including Derek Jeter!

About Harvey Frommer: One of the most prolific and respected sports journalists and oral historians in the United States, author of the autobiographies of legends Nolan Ryan, Tony Dorsett, and Red Holzman, Dr. Harvey Frommer is an expert on the New York Yankees and has arguably written more books, articles and reviews on the New York Yankees than anyone.   In 2010, he was selected by the City of New York as an historical consultant for the re-imagined old Yankee Stadium site, Heritage Field. A professor for more than two decades in the MALS program at Dartmouth College, Frommer was dubbed “Dartmouth’s Mr. Baseball” by their alumni magazine.