Rodion Amirov continued his trail-blazing season with a goal in each of his first three international appearances. Nobody has done that before for team Russia, with only Alexander Popov, Roman Lyubimov and Pavel Poryadin scoring on their first two international appearances. The Maple Leafs prospect is also far younger than those three – just one month past his 19th birthday. Who knows, maybe we just wrote the first chapter of another Red Machine legend.

Before the Karjala Cup got underway, Russia’s decision to send its U20s to the tournament sparked controversy. Yet, Igor Larionov’s juniors proved more than capable of doing the job, winning all three games to lift the trophy. Thursday’s first period against Finland – three unanswered goals in the host’s net – set the tone. The teenagers showed great character to score a late goal on Sweden, forcing a shoot-out that was decided by Yaroslav Askarov’s solid goaltending and Vasily Podkolzin’s skillful winner. Then, in a winner-takes-all showdown against the Czechs, Askarov got his first international shut-out in a 3-0 win. 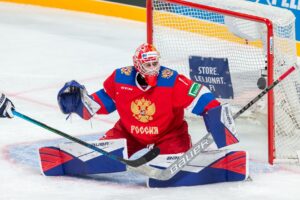 The success of Russia’s juniors on the international stage is not such a surprise when you look at the impact young players have made in this season’s KHL. Although barely a third of the regular season is done, the 2020/2021 campaign has already seen 91 U20 players – more than any other season – get game time in the league. The previous best was set back in 2009/2010. The youngsters are also on track to score more goals than before – the current record is 103, this season’s tally is 42 and counting – and could easily make more appearance (434 games up to now, against a record of 1,714). Not surprisingly, the average age of players in KHL is lower than ever, dropping below 27 years for the first time. And 163 players have made their debuts so far this season, against a record of 215 in the 2013/2014 season when two new clubs came into the league.