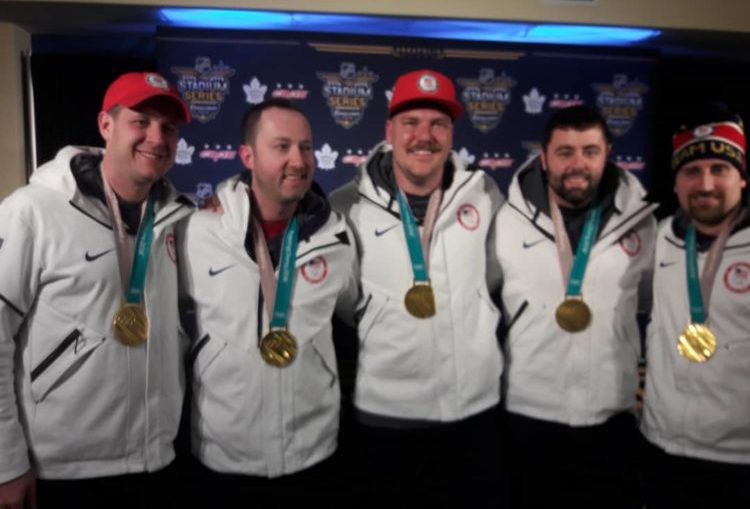 Before the Olympics curling was an afterthought in the United States. We all knew it existed. Our Canadian friends talked about it regularly and so many countries enjoyed it more than we did. Team Shuster beating Canada twice and eventually defeating Sweden for the gold medal seemed to change that.

“When we started out 2-4 we saw what we had ahead of us. This is a team that’s always played awesome with our backs against the wall. For me, I needed to have some fun curling,” Shuster revealed. “I didn’t want my kids to look back on this someday and having all of this video of their grumpy dad playing in the Olympics; when I should have been having fun really soaking in the world’s biggest stage especially for our sport.”

The U.S. never won a gold medal before for curling. They’d never beaten Canada before in this Olympic event and John Shuster and his teammates did that and more. The country really got behind this team even if most viewers still don’t understand the sport.

There are curling clubs all over the United States. It was a niche sport. Now a lot of curling clubs are overwhelmed with requests for people to join.

“I think we’ve been making a huge impact. We’ve been talking to all these curling clubs. A lot more people have been booking and adding to membership. A lot of people want to see what makes curling so great and we were a pretty good example of that in the Olympics,” Shuster added. “We’re people who truly care about each other and the traditions of our sport that are shaped around camaraderie and sportsmanship. Also competing and having some fun.”

The Delaware Valley is experiencing a rise as well.

“The Bucks Country curling club has seen an increase. The Learn to Curl classes have been full for the past few months and they continue to sell out,” said curling enthusiast, Laura Borden. “We’ve been open since 2010 and dedicated to just curling since 2015.”

Curling does have coaches and Shuster talked about their impact.

“Coaches in curling are trying to empower their players. So, before the game they are making sure we’re in the right mindset before we go out there after the fifth-end break. And honestly, reminding you what the goal might be for the second half of the game.”

Team Shuster got to push the rock, with the ceremonial puck attached, to center ice to start off the 2018 Stadium Series game in Annapolis, Maryland. As with Washington Capitals goalie, Braden Holtby, Shuster has a pregame ritual of his own.

“For me, it’s mainly trying to manage emotions out there and I do a lot of breathing out there that I got from sports psychology. For me, I have to stay focused at the task at hand and the shot ahead. Being the “skip”. Our team plays best when we play fast.”

Critics are already saying that Americans will forget about this sport until the next winter Olympics in 2022. I doubt that. Shuster is the symbol of that teams’ success and his star won’t fade that quickly. Sports has a way of bringing people together and for a short time this team and this sport did just that.

This google report shows the rise well before the gold medal game.