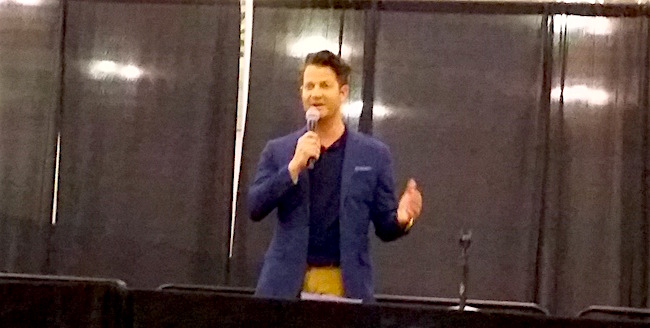 Atlantic City, NJ — Before I could get off the AC Expressway I saw billboards of “The Taj” and by the time I hit the exit for the Convention Center I heard they were going out of business after Labor Day weekend. That’s the reality of that area – – it’s hanging on.

The space is huge and there’s a ton of items collectors can find on the floor. Steiner had some brand new Martin Brodeur game-used items to display. Goldin Auctions had a great autographed, game-used Tom Seaver jersey for auction (1974 season) and I saw a lot of Joe Namath items. Jerseys, and sideline jacket. I did see a few of his game-used Rams jerseys. He played 4 awful games there and two of the jerseys are on the floor. As a lifelong Namath and Jets fan that irked me. 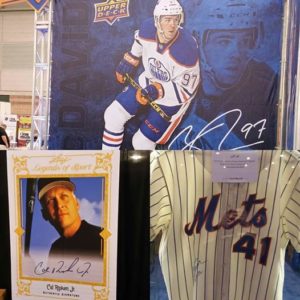 I caught up with a lot of friends. That was really nice.

On my own personal quest to get every Mets team card of the 60’s and 70’s I bought two from Dean’s Cards (not Dean’s house of cards). He had everything alphabetized and a quick Ebay check to get the card numbers made this a quick and easy shopping experience. I did hit one road block. I was looking for a Topps 1969 Mets team card. It would have had the players from the ’68 roster but they didn’t make them that year? Why? They made posters instead? I learned something new. There’s a bonus in that.

I attended the Mike Berkus ceremony that John Broggi organized. It was heartfelt. They dedicated the main stage to the founder of the event. Having performed on that stage with Doug Cataldo, Rob Bertrand and many others, for that first show, it was odd for me. Mike’s son Nate (pictured above is a known television personality) and Dan, both spoke, as well as a few others.

Dr. J, Joe Namath, Mike Tyson and Hulk Hogan will all be appearing on different days. People will definitely be going to the show to get their autographs and they’ll probably pick up a few other things.

I enjoy a show rather than shopping on eBay. I do like searching. It’s always fun to see cards and memorabilia you’ve never seen before.

Go GTS Live covered a pack break of 1955 Bowman baseball. That was fun to see. The cards were in excellent shape and a collector won a free spot.

As a New Jersey resident it was nice to have this in my backyard. I’m sure I’ll be in Chicago next year searching for some other cards to add to my collection. I had my Want List with me and with the help of the Internet that’s the way to fill your collection.

*Note – In the breaker area I was told more than once that Zach Fucale is a hot name this summer. The goalie’s rookie cards are heating up and he’s never played in a game for the Canadiens. He did suit up last year.