You are here
Home > Wrestleology > UFC fighters, Nick Diaz and Julianna Pena, Partied the night Away in Celebration of UFC 200 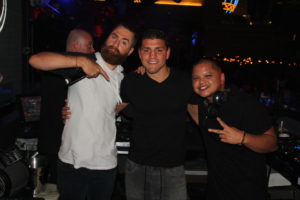 UFC fighters, Nick Diaz and  partied the night away in celebration of the UFC 200 fight last night at Chateau Nightclub & Rooftop at Paris Las Vegas.

The athletes arrived at the club with a group of friends after the UFC bout to walk to the red carpet. Diaz sported grey jeans and a simple black v-neck t-shirt, while UFC 200 winner, Pena, opted for a white lace crop top, black printed skirt and completed the look with gold hoop earrings and gold bangles. The fighters mingled with the crowd and took photos with fans before making their way to a few of the club’s VIP booths where they partied with close friends for the rest of the night under the iconic Eiffel Tower.

Pena, the first woman to win The Ultimate Fighter, competes in UFC’s Bantamweight division. She defeated Cat Zingano last night in UFC 200 and she too can be seen in the documentary “Fight Life.”