You are here
Home > Wrestleology > Velvet Sky Does It Her Way

Velvet Sky is a retired wrestler. She reached the pinnacle of TNA Wrestling and now she’s out there meeting with her fans and working on a new chapter in her life.

“I’ve been in school now for three years. I left school when I was 19, when I was in college. I thought that’s what I wanted to do with my life,” Sky said. “After two years in college, I said, ‘you know what, this isn’t for me’. Wrestling was always a dream of mine….16 years later I’m back in school and now I’m personal training.”

She’s not just another pretty face. She had to go through the hard knocks that all wrestlers experience and the key was she knew when to say when.

“I spent 16 years of my life destroying my body in the ring for the love of my pro wrestling dream. Now I will spend the rest of my life piecing it back together. Getting healthy one day at a time. So that’s pretty much what I’m up to. I go to the gym a lot,” she said confidently.

Pain is a part of being a wrestler and some of that never goes away.

“Some of them never go away. I have discriminant neck pain, neck spasms, every day,” she revealed. “No matter which way I sit or turn my head. If this is the last thing I walked away with then I’m happy. I knew it was time.

“There are people my age in this business, a few girls that come to mind that have had neck fusion surgery, not from one particular bump but that’s from years and years of wear and tear and I see stuff like that every day.”

She’s very down to earth and appreciative for her fans and her career. She’s worked extremely hard to get where she is today and that’s why she’s very protective of her very successful brand.

“I’ve had a very satisfying career with TNA. I did everything I set out to do,” Sky said, with no regrets. “Now it’s time to move on to the next chapter of my life but I love the fans so much and that’s why I always make time to do signings at shows like today.”

I wondered if she made the decision to stay away from the WWE and she answered that and then some.

“I had a very successful career in TNA. I made a lot of money in TNA. I’m not going to sell myself short just for money. It’s not the end-all in my life. It’s not the most important thing in my life. I spent a lot of time in TNA working on creating the character Velvet Sky just to give it all away to WWE. I pretty much would have worked my whole career for nothing. WWE is definitely not in the cards for Velvet Sky and I’m 1000% okay with that.” 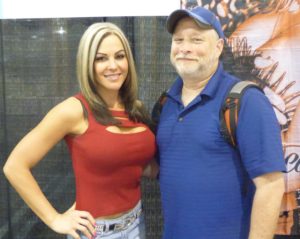 Here’s the concessions she feels she wouldn’t want to make.

“I wouldn’t be able to be Velvet Sky. I would be whatever they wanted me to be. I would probably have to act the way they would want me to act. And that’s fine. I’m not saying it’s my way or the highway. In TNA we had so much creative freedom. I do personal training, but I still do shows and signings I just don’t get in the ring. I make my own schedule. I travel the world. I meet awesome fans and it’s on my own schedule. I don’t have anybody breathing down my neck, telling me where to go, and how to look and how to act. It’s not for me.” 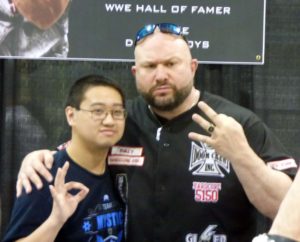 It was a female wrestler from the “attitude era” who made her want to pursue a career in the squared circle.

“I loved Lita. I was a huge fan of wrestling during the “attitude era”. In my opinion the attitude era of WWF was the best era of wrestling ever,” Sky exclaimed. “That’s my opinion. There were so many awesome characters, with great storylines. You had Stone Cold and the Undertaker, The Dudley Boyz and Mankind. Those were all larger than life characters. That kind of drew me in…The Monday Night Wars, WCW, ECW, that was the highlight of the wrestling world. In my opinion and it’s just not the same. It doesn’t have the same feel now but before I got into wrestling and I remember watching Lita.

“I was there the night she made her debut with Essa Rios. At that point I had already started seeking out wrestling schools, I hadn’t been to one yet. When I saw her, I was like ‘Oh my God’ she’s so pretty and so hot. She appeals to the guys and the girls. Everyone loves her, and she was so athletic. So flashy in the ring. I said one of these days I’m going to do that. It took a while. It took a long bumpy road of independents to finally get noticed by TNA. I’m so blessed and lucky to have had the career that I had.”