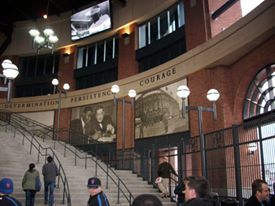 With hype and hullabaloo in the air over the 2018 All Star Game and all of its sidebars, my thoughts somehow turn to Jackie Robinson, a six-time all star and my all-star of all stars. Much is known about him, but there are quite a few things that are not. For your Number 42 consciousness raising:

July 6, 1944, Texas –Lieutenant Jack Robinson boarded a Southwestern Bus Company bus and sat next to a fellow officer’s fair-skinned wife. The bus driver thought she was white but she was an African- American. He ordered Robinson to the back of the bus. The lieutenant, whose military career had been spotless until then, refused to move. He suggested the driver concentrate on his driving.

The two men snapped at each other all the way to the next bus stop. An angry crowd of racist civilians and military police officers crowded around the bus.  Robinson knew about lynching in Texas but showed no fear. One of the military policemen urged him to go to the police station with him. When they got there, another white officer ran up to the car and asked if they had “the nigger lieutenant.” Robinson told the men that he would “break in two” the next person to use that word.

Thirteen depositions were recorded stating that Robinson had behaved badly. He was court-martialed. Enlisting the support of boxing champion Joe Louis, a friend, and also contacting the Secretary of War’s Office asking for advice and help, Robinson was put on trial. He was finally acquitted of all charges by an all-white jury of officers but was banned deployment overseas to the World War II battlefronts. He never saw combat during the war.

Jackie Robinson did not play baseball for five prime years. From his last game for UCLA game in 1940 to his first game for the Kansas City Monarchs in 1945, Robinson’s time was spent playing pro football and serving in the military.

A tremendous all-around athlete, baseball was arguably Robinson’s fourth best sport. It was his worst one at UCLA where in his only season playing baseball, he batted .097. His throwing arm was not that strong or that accurate.

When Number 42 broke baseball’s color barrier, he was a 28-year-old rookie.

On April 15, 1947 at Ebbets Field in Brooklyn, 26,623 fans—an estimated 14,000 of whom were black — came out for Opening Day. Attendance was 5,000 lower than the year before home opener. The Brooklyn Eagle story claimed lowered attendance was due to a smallpox scare and the suspension of manager Leo Durocher.

JONATHAN EIG: (Author of Opening Day) But everyone knew the real reason. White Brooklynites were not accustomed to being surrounded by black Brooklynites, and they were not eager to discover how it felt.

On April 19, Dodgers vs.Giants, Polo Grounds, boosted by a huge turnout from Harlem, 52,355 fans—the largest Saturday afternoon crowd in NL history—came to see and cheer on Jackie Robinson. He had a big day hitting, fielding, running. After the game, Jackie and Rachel had dinner near the Polo Grounds at Bowman’s Café and Grill in Harlem’s Sugar Hill. Autograph seekers, picture takers and the restaurant owner picking up the bill highlighted Jackie’s entering his age of celebrity.

After the two-games at the Polo Grounds, the Dodgers traveled to Boston. Both games with the Braves were snowed out. Robinson spent most of his time in the Kenmore Hotel room.  A local baseball writer found the black pioneer sitting alone on his bed in a darkened room, “A lonely guy…  it’s no fun to see a man fighting against odds that seem almost insurmountable,” the writer wrote describing the enormity of what Robinson was up against and giving insight into his life.

Robinson and Larry Doby of the Cleveland Indians, the first African-American baseball player in the American League, were close friends. Doby on July 5, 1947 broke the league’s color barrier less than three months after Robinson so he was “the second.” They spoke on the phone frequently to each other, sharing their experiences about racism during the season.

The Hall of Famer Hank Greenberg’s final season was Jackie Robinson’s first.  A Jew, a great star, he experienced much anti-Semitism.  He almost immediately befriended Robinson who benefitted from his counsel and friendship. Robinson reported that Greenberg treated him with respect and said words of support to him.

There is a statue of Reese and Robinson outside the playing field of the Brooklyn Cyclones in Coney Island to commemorate a moment that probably never happened. At a game in Cincinnati after hearing racial slurs hurled at Robinson, the Southern born Reese allegedly put his arm around Robinson in a show of support.

There is no mention in newspapers, and according to Newsweek no mention of it can be unearthed. Ken Burns, creator of the documentary on Robinson, calls the moment “mythology. Rachel Robinson was opposed to that statue and suggested that another moment be found.

Playing himself in the 1950 film, The Jackie Robinson Story, Number 42 became one of the big screen’s first black leading men. A low-budget effort, the movie was a good performer at the box office. Robinson garnered positive reviews for his acting and gained even more national exposure.

Invited to attend the second game of the 1972 World Series and throw out the ceremonial first pitch, the 53-year-old Robinson at first rejected then accepted provided he would be able to speak.

He was not happy with MLB’s efforts to back hiring of black managers.

“As long as they keep digging down and hiring guys who have already failed in one city, I’m not encouraged,” Robinson told the Baltimore Afro-American

Told he would be able to speak, Robinson relented and used the opportunity and wide forum to push his agenda to see one day “see a black face managing in baseball.”

The extraordinary duo were fast friends, communicated with each other often and had great respect for each other. The same was not true for Malcom X who Robinson did not respect.

One of the most prolific and respected sports journalists and oral historians in the United States, author of the autobiographies of legends Nolan Ryan,Tony Dorsett, and Red Holzman, Dr. Harvey Frommer, a professor for more than two decades in the MALS program at Dartmouth College, was dubbed “Dartmouth’s Mr. Baseball” by their alumni magazine. He’s also the founder of www.HarveyFrommerSports.com.

His Ultimate Yankee Book has been called by critics “the Ultimate Baseball Book.” http://www.frommerbooks.com/ultimate-yankees.html 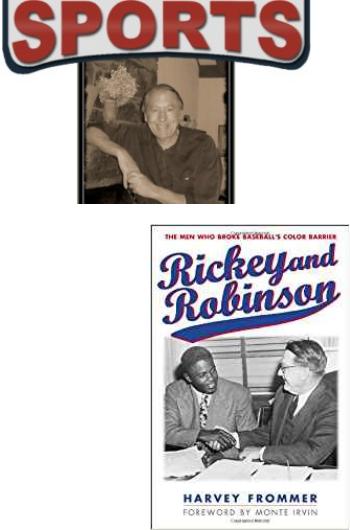