The holiday season always has plenty of options for a perfect gift for the hockey fan in your life, but outside of tickets to a game, there is often nothing better than a good book about the game. Whether it is an autobiography from a favorite player, coverage of the game’s history, or even something completely out of left field, there is usually something on store shelves that will appeal to those on your shopping list.

While there are also some official NHL publications celebrating the league’s centennial that might get a lot of shelf space at your local book store, there are plenty of options covering other aspects of the game that are worth considering as well.

Here are some of the best for the 2017 holiday season:

The Inside Stories From the Players…

One of the most popular players in the history of the Toronto Maple Leafs, Hockey Hall of Famer Doug Gilmour helped usher in a memorable era in franchise history and his long-awaited autobiography is a must-have for Leafs fans. Killer: My Life in Hockey (HarperCollins), written with Dan Robson, traces his steps from childhood in Kingston, Ontario to 20 seasons as an NHL star and beyond. He shares some memorable tales, some of which are quite funny and entertaining.

Also from HarperCollins is Calling The Shots: Ups, Downs, and Rebounds from Kelly Hrudey and Kirstie McLellan-Day. Many will recall Hrudey’s success as a member of the New York Islanders and Los Angeles Kings during the 1980s and 1990s and may even recall the headbands he wore under his mask, but there is much to discover about him in this book. His insights about legendary teammates and even playing one of the longest games in NHL history are worth the price of admission alone.

Perhaps the most fascinating hockey autobiography this season, though, is Dennis Maruk: The Unforgettable Story of Hockey’s Forgotten 60-Goal Man (ECW Press). Written with Hockey Card Stories author and broadcaster Ken Reid, this is a tale that defies logic. Maruk, who was a truly gifted on-ice performer that spent much of his career filling the nets with rubber on some historically bad teams, tells his warts-and-all story perfectly with Reid and some of the stories are incredible – especially those that took place after his retirement from the sport. In addition to coverage of his friendships with a few celebrities, there is also some frank talk about mental health issues which add an extra dimension beyond the typical content found in sports autobiographies. 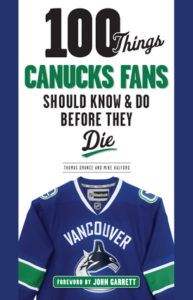 … And Those That Followed Them

For fans that want an inside look at what goes on in an NHL dressing room, they rely on the writers and broadcasters that cover their favorite teams on a game-by-game basis. Triumph Books has put together an ongoing series of titles under the If These Walls Could Talk banner and the 2017 holiday season features three excellent options to consider reading.

Starting with Lou Nolan and Sam Carchidi’s  If These Walls Could Talk: Philadelphia Flyers, readers are in for a true treat. Nolan, who just served his 2,000th game as public address announcer for the Flyers, has been associated with the team from the start and over the course of 50 years, has experienced both triumph and tragedy in the City of Brotherly Love. A candidate for one of the best hockey books of the year, his perspective on some memorable moments and the players that made them happen is remarkable and is essential reading for fans of the team.

Just as solid from a slightly different perspective is Ken Daniels’  If These Walls Could Talk: Detroit Red Wings, which was written in conjunction with respected hockey scribe Bob Duff. For over 20 years, Daniels has been in the broadcast booth for the Red Wings and there are some great stories about life working in Hockeytown, but the aspect that really catches the reader by surprise is Daniels telling about his struggles to become a sportscaster in Toronto and working his way up the ladder. He also touches on his partnership with Mickey Redmond and some heartbreaking moments which take the reader on an emotional roller coaster.

Finally, we have  If These Walls Could Talk: Chicago Blackhawks from Chicago Sun-Times beat writer Mark Lazerus. With extensive coverage of the emergence from the dark days of “Dollar Bill” Wirtz calling the shots to the franchise’s resurgence into Stanley Cup champions, it is loaded up with plenty of player interviews that truly give an inside story.

Triumph Books also offers up another series of sports books which are team-based and loaded up with great stories. The 100 Things (Your Team Here) Fans Should Know & Do Before They Die line has been running for several years and Sportsology’s own Russ Cohen wrote a volume dedicated to the New York Rangers in recent years. In 2017, we have four more NHL clubs added to the line and each one has its merits – even if the reader is not necessarily a fan of that particular team.

First off, we have 100 Things Capitals Fans Should Know & Do Before They Die from Ben Raby. Covering all aspects from over 40 years of franchise history, there are some solid stories and moments that some fans of the Washington squad may have forgotten. The other three 100 Things books covering hockey this year focus on Canadian teams – the Calgary Flames, Edmonton Oilers and Vancouver Canucks.

Thomas Drance and Mike Halford did an outstanding job on 100 Things Canucks Fans Should Know & Do Before They Die and your feel the pain of those that love the team as you read through nearly half a century of futility that have seen the club make three runs to the Stanley Cup Final and never take home hockey’s greatest prize. In 100 Things Flames Fans Should Know & Do Before They Die, longtime beat writer George Johnson gives some excellent insight into the ebbs and flows of success for that particular organization that is especially entertaining. Finally, we have Joanne Ireland’s 100 Things Oilers Fans Should Know & Do Before They Die that traces back to their WHA days and the Gretzky years with their Stanley Cups through the tough times of fan suffering to the great hope for the McDavid era.

Each of these books have plenty of merit not only to fans of specific teams, but also serve as a great chronicle for fans that want to learn more about their lush histories.

Last of all, there are some great books which look back at some fascinating topics from the past.

Arguably one of the season’s top books, The California Golden Seals: A Tale of White Skates, Red Ink, and One of the NHL’s Most Outlandish Teams (UNP – Nebraska) is a genuine treasure for anyone enthralled by the long-defunct team. Author Steve Currier, who grew up long after the Golden Seals shut down and moved to Cleveland for a disastrous two-year run as the Barons, truly did his homework on the subject and delivers something truly special. While you may have to order it online, it is definitely a compelling read and gives the subject the respect it deserves. 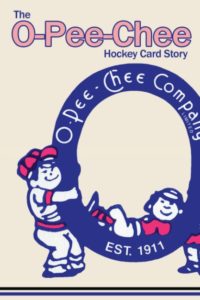 For the card collector in your life, a perfect option is Richard Scott’s The O-Pee-Chee Hockey Card Story. A longtime hobbyist that has a rarely-paralleled love for the minutia of these coveted collectibles, Scott covers the origins of “Young Canada’s Favourite” that goes back over 80 years. It can be ordered online at http://www.blurb.ca/b/8198856-the-o-pee-chee-hockey-card-story

Wrapping things up are two titles from Dundurn Press which look back at the history of a century-old team in two different ways. Eric Zweig’s The Toronto Maple Leafs: The Complete Oral History is a long journey back to the team’s roots and gives plenty of colorful quotes from archival news stories from the players, management, and more. Also available now is J.P. Bickell: The Life, the Leafs, and the Legacy. An effort crafted by Jason Wilson, Kevin Shea, and Graham MacLachlan, this is definitely for those that love the early days of the team and gives a much-needed tribute to the life of a Canadian industrialist who took a financial risk in helping back Conn Smythe’s purchase of the Toronto St. Patricks in 1927.

Stephen Laroche
I'm the author of 10 books. They are all listed here: https://www.amazon.com/Russ-Cohen/e/B0034P5DNC%3Fref=dbs_a_mng_rwt_scns_share If you're looking for autographed copies just go to my twitter @Sportsology and DM me.