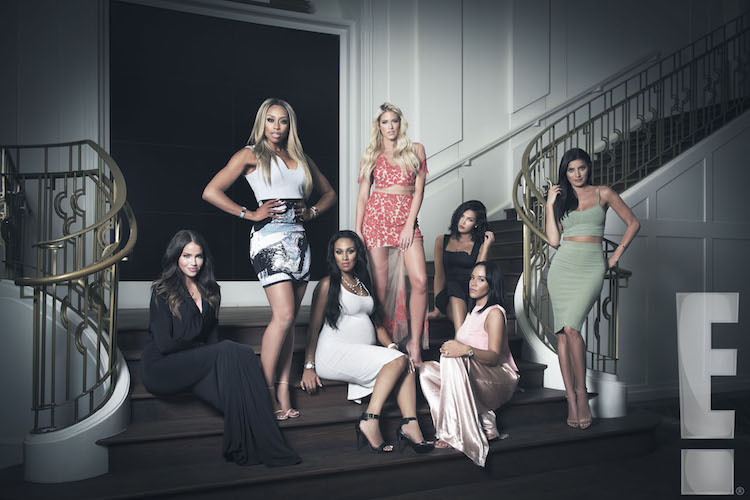 I saw the first few episodes. Here are some early thoughts on the series:

Jair Jurrjens – The current free agent major league pitcher and his wife Kaylin are a perfect match. Jair admitted to battling depression after failing a PED test and a lengthy suspension. Kaylin really was doing her best to keep her husband moving forward and not looking back.

CJ Mosley – His girlfriend, Kesha Norman, and he have an interesting relationship. Mosley, still playing inside linebacker for the Baltimore Ravens isn’t a choir boy. Let’s see how these two manage their relationship.

Harry Douglas – The former NFL wide receiver owns a boutique with his wife, Kierra. They seem like a well-balanced couple.

Here’s more about the show:

Get the stats on E!’s newest WAGS:

Ariel Anderson is the younger sister of Kierra Douglas.  Like her sister, she is no stranger to the football world, following in her sister’s footsteps Ariel danced for a professional football team for years. While Ariel claims that she is currently single, she has been linked to several football players in the past.  Ariel teaches classes at the dance studio she shares with Kierra, but is looking for a larger role in the business.

Niche Caldwell and Wide Receiver, Andre Caldwell, have been together since college and have two children together.  Niche is a model and an interior designer, who admittedly will judge your house the moment she walks in.   Niche is brutally honest and doesn’t mince words when she talks to or about you – call it messy, but she believes the truth will set you free.

Kierra Douglas is married to Wide Receiver, Harry Douglas.  Born and raised in Atlanta, Kierra was a former dancer for two of the city’s most beloved sports teams.  Kierra has a Business Degree and owns two businesses in Atlanta: a growing clothing boutique and a popular dance studio that she operates with her mother and younger sister, Ariel.

Kaylin Jurrjens met husband, pitcher Jair Jurrjens, at the young age of 19 and has been a WAG ever since.  Kaylin is a model as well as a former cheerleader for two professional sports teams, and she has previously won the coveted title of Miss Georgia and placed in the Top 15 in the Miss USA pageant. Kaylin loves to have a good time and never takes herself too seriously!

Kesha Norman has been with C. J. Mosley, Defensive Tackle and an 11-year football veteran, for 4 years.  The couple has a two-year-old daughter together but have struggled with infidelity issues in the past.   Kesha is a stay-at-home mom, who also manages 12 rental properties and a trucking company that they own.

Brandi Rhodes is married to current wrestling star and actor Cody Rhodes, and is the daughter-in-law of the late wrestling legend Dusty Rhodes.   Brandi is a pro wrestler herself and former wrestling announcer, but struggles with being married to a famous wrestler and the challenges that entails.

Shuntel ‘Telli’ Swift is with Heavyweight Champion, boxer Deontay Wilder.  Deontay (“The Bronze Bomber”) worked hard for his title and proudly takes the belt he named “Sophia” everywhere he goes.  Although, Telli draws a line at Sophia sharing their bed.  Telli, first and foremost takes care of her man and family.  And Deontay shows his appreciation by showering her with luxurious gifts.

Sincerely Ward is the cousin of retired football player Derrick Ward.  Sincerely is a single lady but has been previously linked to several football and basketball players, but athletes are not the only ballers Sincerely is attracted to, having dated owners of private airlines, gas companies, and luxury jewelry designers.  Sincerely owns several holistic spas and designs and runs her own resort wear collection.

Hope Wiseman is one of the single gals in the group but has previously dated a football player.  Hope is a former investment banker who now owns a medical marijuana dispensary with her mother.  After meeting when they were cheerleaders at a professional football team, Ariel Anderson and Hope became the closest of friends.