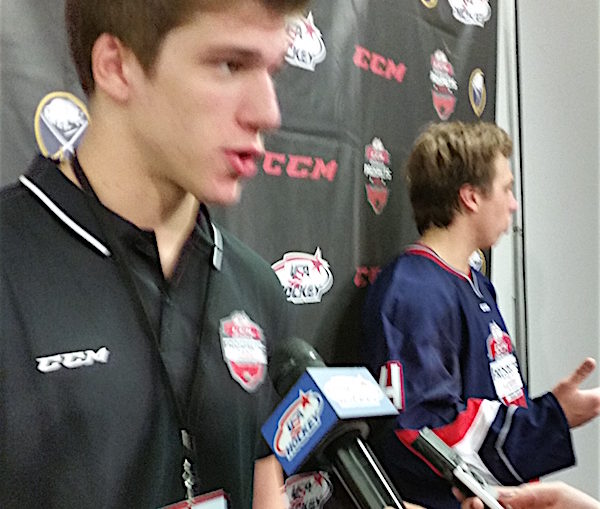 Version 4.0 will come out after the World Champions and possibly after the combine.

1) Auston Matthews – 6-2, 210 – C – When he goes in deep with the puck. Nobody stops him and then he can shoot or pass. He’s unselfish. Swats away pucks with great force on defense. He’s generational player. I’d rank him ahead of Jack Eichel for future potential.

6) Pierre Luc-Dublois – 6-3, 201 – C – He has great hands, stick and puck control. Will lay a hit to make a play. Very strong on his skates. He plays solid defense. He has exceptional stamina. He powers well to the net. Coaches kid. Creates scoring chances for teammates.

7) Jakob Chychrun – 6-2, 214 – D – He’s come back strong from a shoulder injury. Has a big shot. Can lead the puck up the ice. His speed can be better. He has an amazing point shot and wrist shot. He can split the defense with fancy moves. He has a very fast, hard wrist shot that he can shoot in action.

8) Tyson Jost – 6-0, 194 – C – All around player. Heading to North Dakota next season. Goal scorer mentality. Playmaker as well. Captain for the Vees. Great vision. Excellent skater. Got caught off guard on defense because of agressiveness.  Fast skater. Moves up the ice quickly with the puck.

9) Clayton Keller – 5-10, 168 – C – He plays bigger. Good on draws against older/stronger NCAA players. When Keller gets stronger, watch out. He looks like the fastest player on the NTDP. He’s a playmaking center. He has great hands and can draw penalties. BU commit.  Made solid defensive plays.  Keller is faster with the puck than anybody out there. Hard to keep up with and cover. This year with the NTDP has been a record-setting one. His combined games effort make him the single-season assists leader (64) in the program’s great history and the all-time points leader moving ahead of stars like Patrick Kane and Phil Kessel.

10) Logan Brown – C – 6-6, 218 – Excellent passer. Causes matchup problems for the opposition. Lightning fast release on the break. Can make the big hit.  Snapping off hard wrist shots. With a head of steam he’s hard to hold back.

11) Alexander Nylander – 6-0, 172 – RW – He can stick handle through major traffic. Has a rocket of a one-timer. Great on the power play. He’s a precision passer and can make the cross-ice pass. Back checks well.  Excellent passing as usual. Left side on power play. Goes to the net. Streaks through the neutral zone. Tied Latvia game with a rocket top shelf one-timer in the u-18s.

13) Luke Kunin – 6-0, 193 – C – In the AAP game he had the 2nd goal of the game. Fast shot. Scored 3 points and six shots in the All American prospects game. He’s a goal scorer first and playmaker second. Gets down the ice quickly for scoring opportunities. He really shined on a bad Wisconsin team.

14) Charlie McAvoy – 6-1, 211 – D – Good shot blocker and puck mover.  Moves up the ice well. Has a sneaky fast wrist shot that he fires off on net with a defender on him. Plays in all situations.  Nice block and moved the puck up the ice well. Up high on Team USA power play. Solid slap shot. Makes a good chip pass on the power play. Good wrister in close as well.

15) Michael McLeod – 6-2, 187 C – McLeod is a pivot with a goal scorers touch. He’s surprisingly fast on the rush. He can score from the slot with a quick wrist shot. He can play in all situations. He’ll bury the one-timer if you give him space. Can score with somebody on him. Has just enough speed to keep defenders at bey. Protects the puck well.

17) Kieffer Bellows – 6-1, 195 – LW – Heavy shot. Fast release. Gets in on the goalie fast. Dominating at the NTDP. Will play at the NHL level like his father. Carries himself like a pro on and off the ice. Laid a nice hit. Skating well. Making sharp passes.  Laying out players and then laying out to try and score is in his game. Strong wrist shot.

18) Max Jones – LW – 6-3, 201 – Nice goal on the rush. Fast shot. Moves well with and without the puck. Powerful play with skill and determination. Prototypical winger.

20) Alex DeBrincat – 5-7, 160 – C – Goal scoring center who buzzes through the crease area. Fast skater. Fearless. Plays solid defense as well. Has dominated at every level in his career so far.

21)  German Rubstov – 6-1, 179 – C – Big centerman. Shifty skater. Solid stick and puck skills. Fast shot. Will shoot or dish. Decent pursuit on the defensive end. Has a great backhand. Excellent on the power play with a solid shot from the slot. Uses his size and makes good passes to get out of trouble. When he faced a stronger team he wasn’t as effective and lost some puck battles on the side wall.

22) Julien Gauthier – 6-4, 212, RW – Defensive awareness isn’t great. Lethal shot. Good wheels. Scorer. Sets up quickly to score. Looked good in International play. Scored a pretty goal down low proving if you’re around the net offensively good things can happen. He has a fast shot. Gets his wrist shot off quickly with force. Plays on the power play. Has a decent one-timer that can improve. Impressive for a late ’97.

23) Brett Howden 6-3, 190 – LW/C – His older brother Quinton, was selected by Florida in the first round of the 2010 NHL Entry Draft. Big kid. Good offensive ability. Has a frame you can build on. Goal scorer. 2-way. Skates well. Physical. Hockey i.q. is high. Strong. Overpowers defenders to steal the puck. Thinks fast. Scores down low. Good on draws.

25) Riley Tufte – 6-4 – 205 – LW – Skates well. Very strong down low. Can really work the puck out of the corners and can thread short passes to the crease area for scoring chances. Hard to contain by the lower hash marks. Fast accurate shot from the slot.

27) Rasmus Asplund – C/LW – 5-11, 176 – Starred in the WJC. Skates great. Moves well without the puck. Knows where to go. Works well on the walls. Can make the tough passes that become scoring chances and goals.  Skates very wellCan score from far out.

30) Simon Stransky – 6-0 – 170 – LW – Is from a Czech hockey family and this left winger is hoping to become the first to become an NHLer. Good passer. Accurate shot.