Philadelphia – – After the Philadelphia Flyers moved out of the Spectrum a new building became their home in 1996. Since then its had many names but that’s not important. What is important is the fact that the first sporting event to open the building was the 1996 World Cup of Hockey.

A lot has been written about how the Team USA beat Team Canada 2-1 in the best of three series. Most folks may not realize that seats were still being installed in the building prior to that game in Philadelphia.

Paul Holmgren, who was the associate coach of the team remembered it well.

“I know there were still guys in the locker room area. I don’t know if you’ve ever seen the big hot tub in there. Billy Guerin and Keith Tkachuk were in there and they were synchronized swimming. They were still doing finishing touches. The first game was great. We had a good crowd close to 20,000 people. From my standpoint, I was working for the Flyers back then. We had guys from Canada. Guys from the U.S. It was a great game.”

“I was really impressed with the building. To play in a building that was so big. It was massive. And like Homer said it was incredibly loud. It was even louder when we played against Canada in the first game of the Final. But we couldn’t ask for anything better from our fans.

“What I remembered most is how loud they booed Eric Lindros when he was introduced in the first game and even louder in the first Final. It was unbelievable. I remember in the first game of the Final I had Joel Otto pitted against him for the first face-off. I kind of asked Otto on the first face-off, don’t worry about it just give him a cross-check and we’ll see what happens. Literally, all hell broke loose at that point. Lindros took a step back like ‘what are you doing?’. We kind of sent a message that first shift that we were here. It really meant a lot to us to beat Canada and to win the World Cup.” 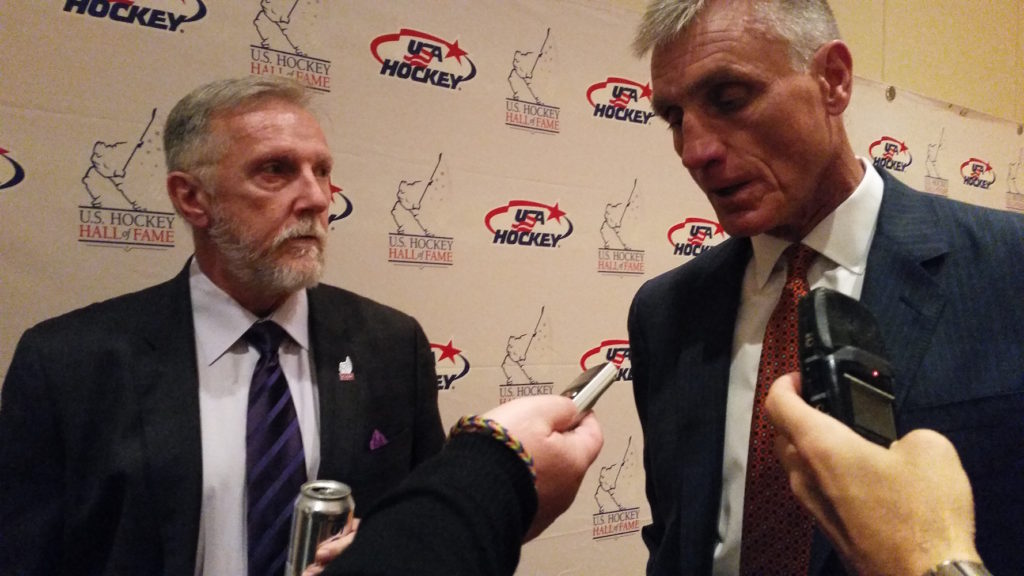 “For the first game of the Final it was an electric game,” said Otto, who returned to Philadelphia for the 2016 U.S. Hockey Hall of Fame induction, for the first time in 18 years. “Fans were going nuts. There were chants. It was a big lift for us. It was a great, great, atmosphere. It was quite exciting. I’m getting chills just talking about it.”

“I can remember the first time we walked in there. They were still putting paint up,” said tournament, MVP, Mike Richter. “What Otts said about the closeness of the team. We just felt like it was a clean slate…Guys just had so much optimism. They were like, we’re playing in a new place, in Philly, it was great. Canada was headed by Lindros, and this was the perfect place.”

“Well for me being a New York Ranger, playing in the Spectrum, I heard all the stories about the “Philly Flu”. Skating around in warmups, listening to everybody yelling at you. Flyers jerseys everywhere you looked. So, the new building was bigger. And they added more of those fans,” Brian Leetch added. “There were still jerseys everywhere. It wasn’t like all of a sudden they brought in a new group of fans. Which some buildings turn into that. They hike up the price and you have a different group that comes to be entertained. As opposed to being a part of the team on the ice. I don’t think Philly has changed in that regard at all.”

Did the team get a call from then, President Clinton or a high-ranking official at the time?

“No, nothing like that,” Leetch laughed. “It was still hockey in the U.S. And its summer hockey too. A double whammy. To play those two games in Montreal and feel that country’s excitement and get those two wins there, we realized the importance of it in that hockey community.”

In addition to the induction of the Class of 2016; the 1996 World Cup team, Bill Belisle, and Craig Janney. Pat Kelly and Mark Howe both received the National Hockey League’s Lester Patrick Trophy.