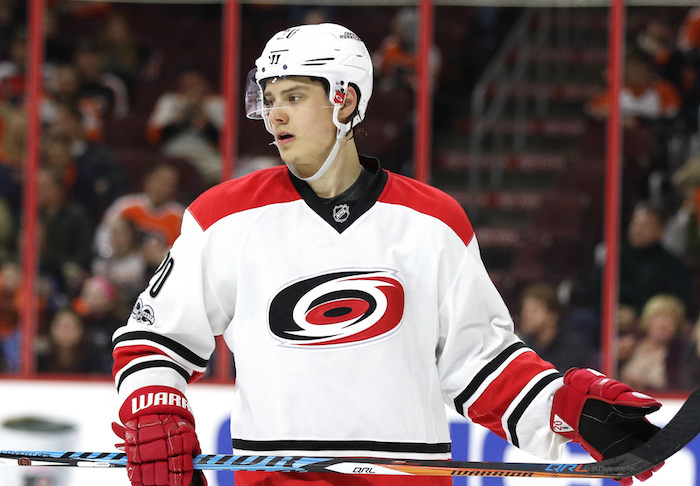 Philadelphia – – Most people knew that Sebastian Aho had a boatload of talent even though the Carolina Hurricanes were lucky enough to draft him 35th overall in the 2015 NHL Entry Draft. It happens. The draft is a fluid situation and teams go by their boards and not enough teams had him high enough on their boards.

Before this season began I talked about this being the deepest rookie crop in many, many, years. I did a preseason Calder list and Aho wasn’t on it but I mentioned how deep this class was and he was definitely a reason why I wrote about it. Did I think he’d play all 82 games? No way.

“I really didn’t have any expectations. I just tried to play the entire season in the NHL,” Aho said. “That was my #1 goal. It’s been a great year.”

His 24th goal was scored against the Philadelphia Flyers in game #82. It was a blistering shot off the power play and that was the moment I knew he was going to be a star in this league. Not just a good player but a star. A player who can get 75 or more points. He had 49 in his rookie season and that’s a great start. There’s always a point where it starts clicking for a player and Aho is no different in that regard.

After last year’s World Junior Championships and World Championships the Finn earned the right to try and make the team out of training camp and he did just that. Did he have to learn another language? He did have to learn how to speak English and that’s where American television was a big help or possibly a hindrance to him.

“I lived with Teuvo Teravainen for the first few weeks,” he divulged. “I really didn’t speak any English so it was fun to speak with someone. I watched ‘How I Met Your Mother’. That’s good.”

Aho was happy to get the win. He got the win for his teammate Bryan Bickell, who announced he was retiring after this game. He has multiple sclerosis and this is where hockey and hockey players tug at our heart strings.

“It was a big win. We got the big goal by “Bicks” in the shootout We got this win for him and he’s a great person.”

Aho was mostly pleased with his season. He knows what he must do to maintain what he did this season and get to the next level in the years to come. I have no doubt he’ll achieve his dreams.