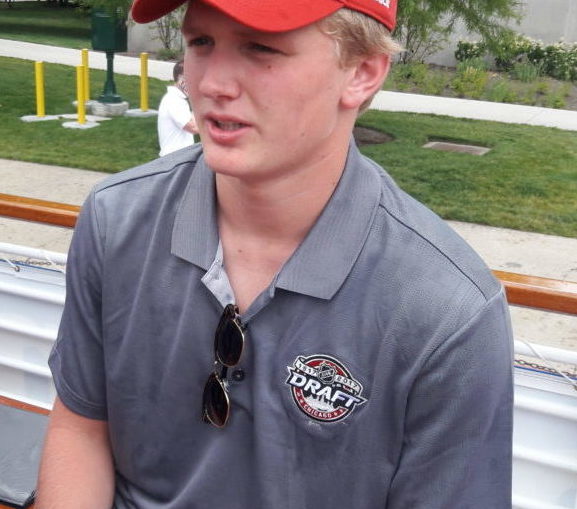 Casey Mittelstadt was one of the most talented players in the 2017 NHL Entry Draft. Somehow, he dropped to 8th overall. Did he drop because teams didn’t think he was talented? Did teams bristle at his combine results, and they weren’t all bad as I had previously pointed out, or did they see something they just didn’t like about his game? Thankfully, Team USA got to see him at the World Junior Championship Summer Showcase and he racked up a tournament leading eight points.

Why was I so high at him pre-draft? I did rank him 3rd. The biggest reason is every time I’ve viewed him he was one of the best players on the ice. Playing up in age or playing within his peer group. He can just flat out play. His commitment to the game is great.

“I work out quite a bit. That’s not a problem. There are certain things I focus on and certain things I don’t. Like I said I try and be a hockey player. Obviously, there’s things I can get better at,” Mittelstadt acknowledged.

Some players play hockey because it’s fun. Or because they’re good at it. The Minnesota native plays it as a way of life. How many hours a day does he think about the game he loves?

Even at the breakfast table?

“Yes, thinking about practice. I talk hockey with my brothers (his brother John, 15, plays for Eden Prairie Bantam AA) who play. We play a bit in the backyard.”

I think players need to play other sports. Even if it’s for a short time. It works different muscles and helps with the mental processing of sports situations.

“I played lacrosse for my school until I was in 9th grade. I was pretty good but that’s when I was ready to focus on hockey,” Mittelstadt stated.

He will spend 1-2 seasons at the University of Minnesota. If he spends more time there that’ll be his choice not because he doesn’t have opportunity at the next level. The training he’ll get there will help him for the rest of his career.

“That’s why I chose college as a good route for me. I can get some time in the weight room. I have pretty good legs and lower body strength but upper body strength is something I can work on,” he answered. 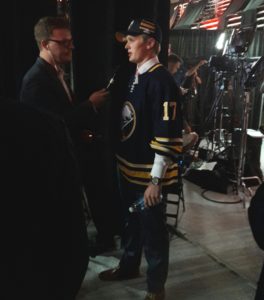 He’s a center who’s already six-feet over 200 pounds. His hockey speed is great and he can turn defensive plays into offensive scoring chances. He can skate with the best of them and be just as creative. For now, Sabres fans will continue to talk about Jack Eichel. In a few years, they’ll be talking about the two of them.