You are here
Home > Hockeyology > Devils vs. Phantoms Observations

Here are some notes I took from this game:

Pavel Zacha – 6-3, 215 – C – On the first line with John Quenneville and Marian Studenic. Quick accurate passes and he was off and running. Wrist shot was crisp on the power play. Creating with passes on the power play. On PK. Showed great stickhandling in the offensive zone. Winning draws. Set up the first goal of the game with a pass to Studenic for a wrist shot goal.

Michael McLeod – 6-2, 195 – C – Weak on the wall. Turnover on risky, borderline fancy play in his own end. Had a nice scoring chance turned aside by Lyon. A solid wrist shot. Laid a big hit against the boards. 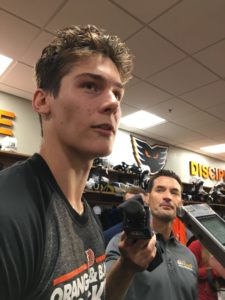 Mikhail Vorobyev – 6-2, 206 – C – Nice offensive chance on the PK. Stickwork was solid. Passing was too fancy and borderline risky at times.

Phillippe Myers – 6-5, 212 – D – Slick on the power play with his passing. Solid in all facets of the game. He’s getting more well-rounded at this point in his development.

Alex Lyon – 6-1, 196 – G – Was calm in traffic. Quick stick saves. Quick glove. Gave up an ugly goal from inside the redline. Not paying attention. A few plays before the Ramage bounced one from that area to test him.