Jan Mysak was a player who most knew had talent, but there was some doubt as to what he might be able to do over the long haul. He only played in 22 games last season for the Hamilton Bulldogs, and he had 25 points in 22 games.

At last year’s World Junior Championship, he had two points in five games. Two things that made me think this player had first-round talent was his hockey I.Q., his ability to play with speed, and his goal-scoring ability.

In a recent 7-1 loss to Sweden, who dominated them, Mysak had the lone goal. A goal that gave his team a 1-0 lead and that gave his team some temporary hope that they could hang with the Swedes. It was a power-play snipe, a quick shot that was on his stick for a second or two, and it went high into the back of the net.

The talented center has to work on his face-offs. He went 5-13 for 38%. Who knows if he will play center or wing if and when he gets to the NHL, but the Montreal Canadiens took a calculated risk by drafting him with their 48th overall pick in the 2020 NHL Draft. 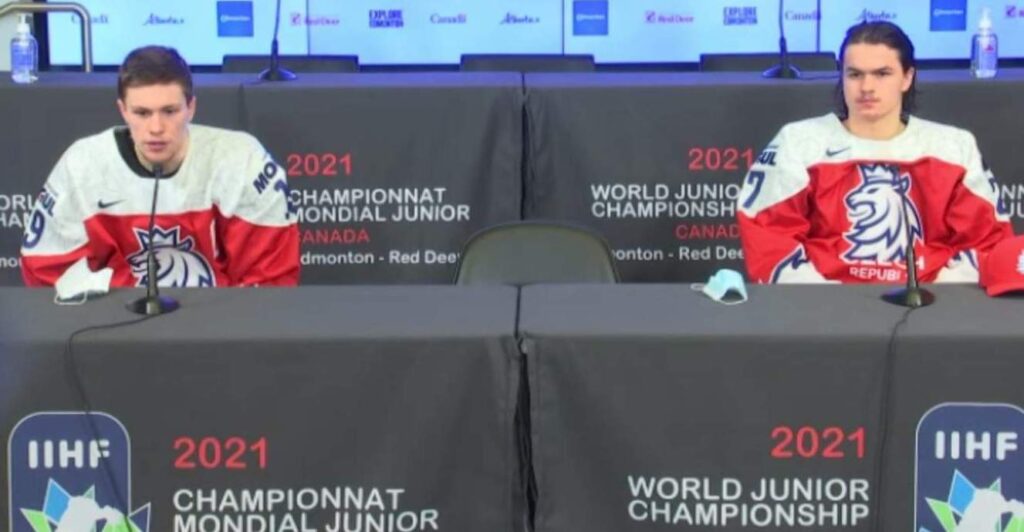 Mysak (left) has the confidence of a star player, and he’s also got the humility and checks and balances of a professional who can turn the page on a bad team effort and hope for the best in their next game against the Russians. That’s why he’s the team captain.

“We saw them play yesterday,” Mysak stated. “We’ll stick together and prepare and play better than today.”

Mysak is out on loan playing for HC Litvinov in the Czech League, and his head coach, Vladimír Országh, is the assistant coach to Craig Ramsay, longtime NHLer, and NHL coach for the Slovak National Team, so Mysak is getting excellent coaching.

Mysak has to clean up things in his own end, but that’s not uncommon for young offensive players. He has a lot of promise, and at the age of 19, he can continue to play against men this year, especially if the OHL never gets off the ground and possibly next year, again with Hamilton, before he’s ready to come to North America.

There’s a lot to like about Mysak. The Canadians knew what they were doing when they selected him.

Michal Gut pictured on the right.