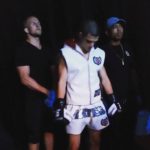 Trenton, NJ – – Glory 33 was a full night of excitement and a few surprises. This was my first event so please excuse me for not knowing every term and all the ins and outs of the sport. Rico Verhoeven retained his heavyweight championship, another belt changed hands, and a fighter from Toronto, Matt Embree, had a TKO and a knockout in the same evening. Tie Domi would be proud.

VanNostrand pummeled Moore with kicks and punches in the first round. He went down once. VanNostrand TKO 2nd round :35. Moore became defenseless in the second round.

Daniel Morales coming alive in the third and final round. He was losing the first two. Ambang was against the ropes for part of the third round.

Decision: Unanimous decision for Francois Ambang. He won the first two rounds for sure in my eyes. Morales was a case of too little, too late with his offense.

Graf seems to be 5 inches shorter than Gladstone. Both are fast with their kicks. Gladstone having the reach is a huge advantage in measuring up Graf. Graf was starting to take shots to the face in the second round. The second was active. Gladstone seemed to have the upper hand. Gladstone landed some punches when they weren’t clenched. Graf then fought back with kicks and punches. When she mounted offense Gladstone fought her off. They hugged at the end. They were both pretty spent.

He is challenging McDonald to hit him and then he counters hard. Parry landed a few more punches. McDonald lands basic kicks and Parry shrugs them off. Chi-Lewis Parry predicted a second round KO on ESPN and he hurt McDonald twice in the second round. Big punch to end the round.

Decision: TKO for Parry in the second round, 3:00

Wilnis connected on some nice kicks early. Wilnis was controlling the round. Marcus was countering. Total domination in the second round. Finally they were both mixing it up. Wilnis got him in the corner and got a standing 8 count on his opponent before the bell. A slip after some staggering punches by Wilnis. They stopped the fight. He is the new champ.

Decision: Jason Wilnis TKO 1:14 in the third round.

Both traded blows early. Adamchuk got nice kick in early. Chikadze was holding him off with jabs. Chikadze was the aggressor early in the second but Adamchuk was pesky. Chikadze scored an early takedown and then kicked down Adamchuk as well. Adam was fighting back. He may have been faster but he wasn’t landing anything meaningful. Chikadze missed a big roundhouse kick late. He was on the mat late as well. He won the fight.

Enbree was aggressive early as Lim was trying to measure his movements waiting for the right opportunity to strike. Lim then started to jab with great speed. He’s known as the greatest Korean kickboxer of all time. Lim landed a great back kick. Lim missed a haymaker kick and hit the mat. Lim got in an early kick to the head of Embree. Embree landed some body blows and then he knocked Lim down with a nice punch. Lim was caught in the corner and Embree tried to finish him but the bell rang and then he dropped him, again with another punch.

Decision: Embree won by TKO after two rounds because of the maximum knockdown rule (two in one round, 3:00).

Gerges was kicking Inocente’s leg with force early and often. Inocente started landing some kicks to his opponent’s legs as well. Gerges had a knee on the mat. Maybe a slip. Inocente landing a few good punches to get some points late in the first round. Gerges was taken down early in the second round. It made a loud thud in the arena. Innocente landed a pretty light kick at the bell. Innocente was bleeding from the eye in the third round. Gerges kept hitting that eye. Gerges started to gain momentum with punches moving Innocente into the corner. Innocente got in a late backhanded punch. This was very tight.

Decision: Innocente got the win by a split decision.

Matt Embree landing hard punches early in the round. Chikadze countered with some nice combinations. Embree tagged Chikadze with another hard punch that sent him staggering into the corner and on the mat. He got up. A right cross to the jaw did it. Both had flurries early in the third round. Another right hand knocked him out cold.

Early in the first Verhoeven was kicking hard. Silva was looking to land a roundhouse punch. Verhoeven was faster. His low kicks were landing. Silva was punching well but it wasn’t enough. Verhoeven started to knee Silva effectively. Silva hot in a few punches to the head. Verhoeven was measuring him up. Verhoeven hit Silva with a short punch and he dropped him. Then again. Then a third time. When he won the fight he did the cut sign to his throat while revving up the crowd.

This was a good experience. The fighters all hung around to watch the other fights. The media really loves the sport. I enjoyed it.

Embree before his first fight – photo by Sportsology