Having been around Sam Morin for many years now, pre-draft, as a member of the Phantoms and Flyers, I have rarely met a guy who is 100% optimistic all the time. He’s rehabbed from some terrible injuries. He hasn’t played in a while, and yet, when his coach, Alain Vigneault, asked him to switch from defense to offense, he was all in. 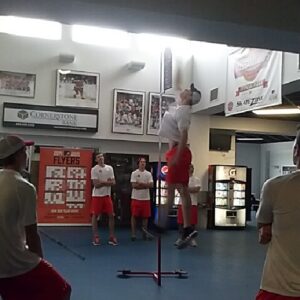 To be honest, I didn’t think Morin was going to be able to play defense for the Flyers this season or any season, post injuries. He was always a good straight-line skater, but he wasn’t going to be able to do some of the other things’ defenseman have to do, very quickly, in the future, so I see this as trying to fill a need on the club. Morin sees it that way as well.

“I think I was the only one in town in October. I think AV was saying that I was working hard to be back. He asked for me for a meeting. He just told me straight up if I could play left wing. He told me about the lack of physicality in the playoffs, especially against the Islanders. The guys were kind of getting pushed around, even against Montreal. They kind of needed a guy to answer that. Obviously, in the past, I did it. I think I was pretty good at it. Those big guys playing physical and even fighting. It’s something that I’m willing to do. If I want to make the NHL, if I want to make it, I need to play physical and fight. If you look at the roster right now, I don’t think there’s a lot of guys that would do it, especially here. I’m the only one. I’m ready to go. I’m ready to do this.”

What team couldn’t use some toughness in the bottom six especially during the playoffs? Getting him to that place will be a challenge. This won’t be a seamless transition and watching video of Islanders forward Matt Martin is smart, but he knows he will need reps at this position, and this is where he would have benefitted from playing preseason games that don’t exist in this 56-game schedule. Although playing dump and chase on a 4th line is simple. Playing left wing off the wall will be a big change. As a defenseman, everything was in front of him, and now it won’t be. That’s an adjustment, and deciding when to rush up the wall will take some time too. On the plus side, he’s a defenseman, so he’s got that part down.

Jobs are scarcer than usual this year. The AHL may start on February 5th, we’ll have to wait and see on that front. Morin is taking a shot to take a possible upturn in his career and crack the lineup of a playoff contender. Once things for sure. There will be plenty of battles in training camp, and AV will run some very hard practices and scrimmages because that’s all he’s got.

*cell phone shot of Sam Morin in rookie camp showing off his vertical.