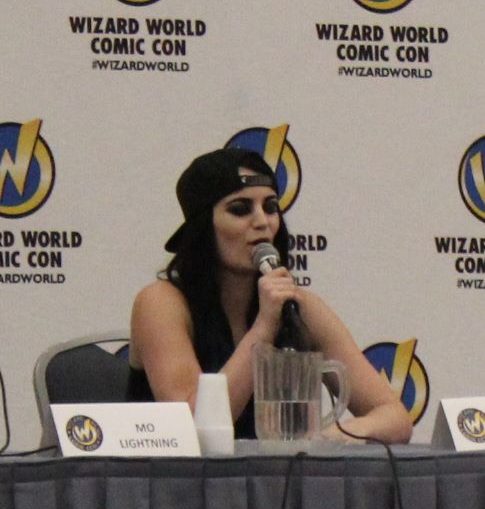 Philadelphia   – –  Full disclosure : I am a big fan of DC’s “The Flash”. The CW has a big hit on their hands and one of the more compelling villians this year was Plastique, portrayed by sassy acress, Kelly Frye. Born in 1984 in Houston, Texas, that’s when I attended college at U of H. Gulp. Anyway she had a lot to say about the television series and the actors. She also said whether or not she’d be back. She provided everything you would ever want in a celebrity interview and more.
See her Wizard World debut here:

She was on stage for 15 minutes so this was a portion of that. I would love to hear more from her and I invite her to come on my Blogtalk radio show anytime. She’s a big Houston Rockets fan.

In the meantime check out more Wizard World video here;

Traffic was up today as compared to Thursday, which is expected but the positive vibes have been the same throughout.

Sunday was great. WWE Diva, Paige (pictured above), starred, and she was very honest and charming. Especially with the kids. There is some video on the link above and a snippet on my social media account as well.

To close this, fans had better outfits than ever before. They really stepped up their game. The panels were bigger and better than ever. I bought a few things as did many others. The best quote of the weekend came from the lips of M. Knight Shyamalan.

“I tried to film Wayward Pines in Philadelphia…If the show was called, “Wayward Maples” we would have.”