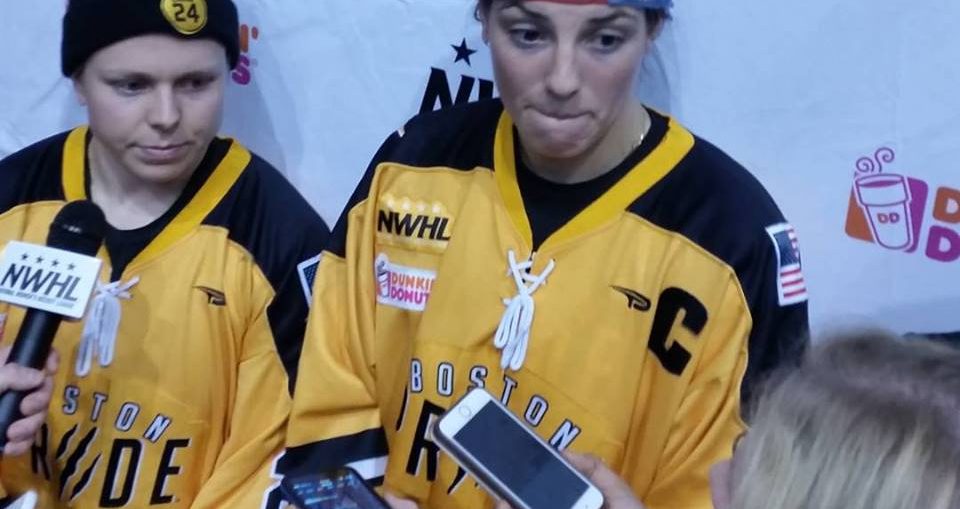 Newark – – I’m pretty sure there weren’t 14,000 people for the first Stanley Cup Finals game. The NWHL had their first historic game and “The Hockey House” was filled to capacity. That’s all you can ask for when you have no other championship game data to compare it to.

There was a nice mix of mom’s dads and 20’s something guys and girls. The souvenir booth had some nice shirts, hats and pucks and the atmosphere was festive. The circus was in the main building so there were two events running simultaneously. In the old days the circus was more important than the New York Rangers playing home games in the 1950 Stanley Cup so times have changed.

Hilary Knight was the star of this game. She’s already the biggest star in the NWHL and she scored the game-tying goal in the third period and the game-winning, overtime penalty shot goal. The final score was 4-3 Boston over Buffalo. I’ve never witnessed an ending to any game like that. Not in the Stanley Cup playoffs, AHL or any junior game I can remember. Fans went crazy. Here’s what it looked like:

“The puck was covered in the crease (by Beauts goaltender, Brianne McLaughlin). Obviously I was working the wining side of but I think the referee made a great call,” said Knight. “Penalty shots are a lot of pressure but you have to remember the goalie is under just as much pressure as you are. It would have been nice to steal the win in 60 minutes but they’re a great team and you have to give your hats off to their efforts.”

The Boston Pride goalie, Tiffany Ott was asked if it was fun to be a spectator on a penalty shot.

“I’d rather be a spectator then a goalie being shot on. I was confused. I didn’t even know what was happening or if it was going to even be a penalty shot on me. But then I saw the Beauts yelling and fussing so that was comforting.

“Knighter is tough. We pray times a week against each other and she’s pretty unpredictable. She can pretty much put it where she wants.”

The Boston Pride had to kill off a 5-on-3 power play in the third. 1:22 was too much time. With 14 seconds left of 5-on-4 the Beauts got a goal from Kelly Steadman to give the Buffalo Beauts the 3-2 lead. That didn’t last too long when Knight tied up the game to send it into overtime. Overtime was set for 20-minutes of 4-on-4.

“We have a little chip on our shoulders. We play with our hearts and that’s what the Buffalo Beauts are about so we’ll do that (tomorrow),” said Beauts defenseman, Emily Pfalzer.

This game had lead changes. Buffalo came back from a  two-goal deficit to take a one-goal lead. The speed of the game was fantastic. The goaltending was superb. Both teams gave it their all and the results was an action packed Game 1.

The series is a best of 3 so the Beauts now face elimination.