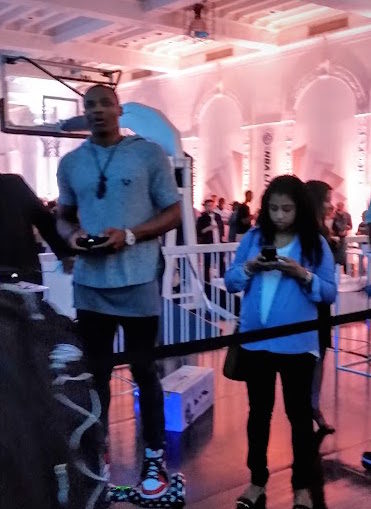 This year I’m doing my review like a journal. Step by step. I have the full X-Box one version.

I bypassed game face for now.

Making a buzzer beater 3-pointer with cover athlete, Russell Westbrook, to beat the Cavs is cool. Took me two times to do it. I momentarily skipped playing the full predicted 2016 NBA Finals for now so LeBron and company will have to wait.

The ESPN on NBA intro is sweet.

I created Flash Cohen. He looks great and so do the players. So far the game is very fluid players move great and it’s very easy to pick up and just start playing.

I played a scrimmage at Terminal 23 where I did get to take a shot on net at the NBA Live world premiere. I missed from the foul line.

I asked about what was new and here’s what I was told:

“It’s huge. We made another huge leap from 15 to 16 as much as 14 to 15. Xbox one and PS4 are exactly the same. We shot probably 23 days of motion capture. Thousands of new animations.”

NBA Live 16 will be released on September 29th.