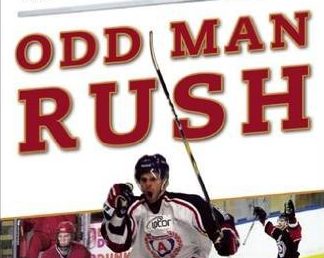 Bill Keenan was a hockey player who played at Harvard University from 2005-2008. I may have covered a game of his. When he wasn’t drafted by an NHL team his hockey odyssey began.

As a junior hockey player, and a Ranger fan growing up, he had some interaction with Adam Graves who wrote a very honest foreword. The chapter on how they met was typical Graves spending time with young hockey players and trying to give them some guidance.

Injuries took their toll on his college hockey career. He wasn’t drafted and that’s when he became a hired gun. He played in Belgium, Germany, Sweden and Iceland.

I really enjoyed his adventures with women, strange hockey players in strange lands and his honesty. He did get a college degree and he also got a degree in hockey and life, sometimes that’s just as valuable.

I highly recommend this book to any hockey fan. Skyhorse has a real gem on their hands.

You can purchase the book here:
http://www.amazon.com/Odd-Man-Rush-Harvard-Somewhere/dp/1613218176