Paul Henderson is 74 years young. If you want to talk about the sport of hockey with him he’ll not only oblige but he will exceed your expectations. Most of us recognize his name as the hero of the 1972 Summit Series where Canada beat the Soviet National Team. The series pitted these talented hockey countries against each other for the first time. It was an eight-game series and Canada won the final game 6-5.

Leading up to the winning goal there was some interesting things happening on Team Canada’s bench.

“I wasn’t even supposed to be on the ice, really,” he stated. “There was about a minute left in the game and maybe because I scored the winning goal in the two previous games, I stood up and did something I never did in my life. I started yelling at Peter Mahovolich who was the left winger and thank goodness, he wasn’t the coach and he came off the ice. I jumped over the boards because there was about 40 seconds at this point.  The Russians said if it ended up in a tie they were going to claim victory because it would have ended in overtime and both teams had three victories each and two ties.

“(Yvan) Cournoyer had it over at the far board and I yelled at him. I knew he saw me and he passed it to me. I was a right-handed shot coming off the left wing and I was hoping to one-time it. It was way too far out in front of me and the defenseman quickly put the stick between my legs and I ended up with my momentum crashing into the boards. I remembered thinking I went through the whole team with 2:30 left in Game Seven and I still had time to go through the team again so I jumped right up and when I did the puck was right there. Phil Esposito whacked it at Tretiak and he should never have let the rebound go and he did it. I took one shot in the right corner but he got his pad on it but it came back to me and I had about a foot to put it in.”

September 28th, 2017 marks the 45th anniversary of Paul Henderson’s game 8 series winning goal in the 1972 Summit Series. To mark this anniversary Paul Henderson will be hosting an event to launch a project dedicated to passing on the moment voted the “Greatest in Canadian Sports History” to a new generation. The event will bring together two classes of school children to introduce them to both Paul Henderson, the hero of the series, and the story of this great Canadian moment.

“It wasn’t my idea to write the book (the greatest jersey ever is a children’s book). The lady came to me. Great to be a part of it. She wanted to pass the legacy on. This is a legacy piece and I’m all for that,” said Henderson. “I’ve got grandchildren now so I think it was a great idea. I wish it was my idea but it wasn’t.”

Most believe Tretiak was the best goalie to never play in the NHL and that could be a big reason why this goal was so memorable.

“He’s really a good guy and I’ve gotten to know him well. A few years ago, I was inducted into the International Hockey Hall of Fame over in Stockholm. Mats Sundin went in as well as Teppo Numminen and Peter Forsberg,” he remembered. “Who walks out to introduce me? It’s Tretiak. I was totally surprised. He said a few nice things about me because he had to. Then he looked at me and said I know why you scored that last goal. He must have waited for fifteen seconds and said Paul, the reason you scored that goal it was very bad goaltending.”

Henderson was a big fan of the World Cup of Hockey.

“I think everybody wants to wear the sweater of your country. There’s a tremendous pride. They all want to do that and compete against the world. I think it’s some of the best hockey. I loved it. There was no fighting. I think it’s great hockey. Love it.” 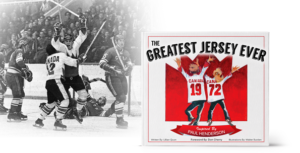