“He deserves credit and where would I be without him?  Phew! He can give me a job in the outfield and he can catch, too.  Good kid, too. He’s good.”—Casey Stengel 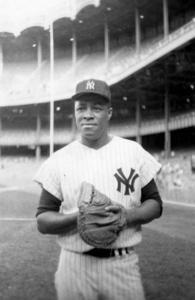 With all the newspaper headlines today documenting angst and anger and antagonisms in the sporting scene and elsewhere about race relations and unity, a flashback to a different time and a remembering of another Yankee great is welcome respite.

The Yankees scouted Elston Howard playing in the Negro Leagues for the Kansas City Monarchs. He was signed to a minor league contract and broke in with in with Muskegon, Michigan in 1950 in the Class-A Central League. His playing there was interrupted by two years Army service.  In 1953, Howard played for Kansas City of the American Association, the Yankees’ top farm team. He did well, hitting .286, collecting 10 home runs, driving in 70 runs.

There was much clamoring for the Yankees to promote Howard to the major league roster and finally have their first African-American player. No dice.  In 1954, the Yankees assigned him to Toronto in the International League, outside their organization. More controversy. Charges of Yankee prejudice and discrimination were in the news. Frustrated but determined, Howard batted a robust .330, hit 22 home runs, drove in 109 runs, led the league with 16 triples and was named the International League’s Most Valuable Player.

MONTE IRVIN: Howard like me bided his time. By the time he made the Yankees, he was 26.  He also had to suffer through the indignity in that first spring training of not being able to stay with the rest of the team at their hotel in segregated St. Petersburg; he had to be put up by a family in the black section of town. He bore up under this, too.

On April 14, 1955—almost eight years to the day that Jackie Robinson broke the color barrier—the Yankees called up catcher Elston Howard. He had been in the team’s farm system since 1950 and won the International League’s Most Valuable Player in 1954 and could have been the regular catcher for most major league teams.

Manager Casey Stengel appreciated Howard’s versatility and that rookie season, one in which he earned $10,000,  with Yogi Berra still quite “the man,” Howard caught nine games played and played 75 games in the outfield.

Pressure for years had been put on the Yankees to break their own baseball color line and Elston Howard, affectionately known as “Ellie,” was a wise choice. He had the goods.  Much has been made of the fact that Casey Stengel said: “When I finally got me a nigger, I got one who could not run.”

Those who knew Casey knew the comment was another example of his running his mouth, an old habit that was hard to break. The “Ol’ Perfessor” was also very much aware that although the first black Yankee was not swift afoot, he was a tremendous athlete, dangerous as a hitter, a very capable handler of pitchers, a class act all the way around.

And it was the St. Louis born Howard who made the point: “No one in the Yankee organization made me conscious of my color.” And he fit in and flourished in the winning culture of the New York Yankees.

Clear evidence of his acceptance was visible a month after his major league debut on May 14th. Howard slashed a triple in the bottom of the ninth inning with two outs, two runners on and the Yankees trailing the Tigers 6-5. The three bagger vaulted the Yankees to a 7-6 victory. Entering the clubhouse, Howard was touched by the carpet of white towels Collins and Mantle had laid out from his locker to the shower.

Casey Stengel utilized Howard from 1955-1957 in the outfield and as catcher.  An American League All-Star nine straight seasons (1957-1965),a two time Gold Glove catcher, Howard batted over .300 three times. Number 32 had a heck of a career not the least of which included being a major part of ten pennant winners and four World Series champion teams and winning the MVP award in 1963, the first black player to be so honored in the American League.  A jubilant Howard said: “I’ve just won the Nobel Prize of baseball.”

When Ralph Houk became manager in 1961, Howard finally became the regular catcher. The 36-year-old Yogi Berra went to left field. “Ellie” had the season of his life — hitting .348. He also rapped 21 homers, drove in 77 runs. In 1964, he won his second Gold Glove, and led American League catchers with a .998 fielding mark, as the Yankees won their fifth straight pennant.

Inventive, interested in all things baseball, Howard pioneered the hinged glove. That made possible one-handed catching and a catcher being able to place his exposed hand behind his back protecting his “meat” hand. The weighted donut swung by some batters in the on-deck circle was also invented by Howard.

In 1967, Howard was traded to Boston. A few years later he came back to the Yanks as the first black coach in the American League. He was a vital and respected member of the coaching staff for eleven years.   A solid catcher who played 13 years for the Yanks, “Ellie” was in nine World Series. He was strong and solid in the clubhouse, a guy who everyone could count on.

Tragically, man they called “Ellie” passed away from a heart attack on December 14, 1980. He was only 51 years old.