With the Sox on the cusp of winning another World Series, with fans all over New England savoring the time, a look back to 1912 provides a marvelous historical treat.

Business in Boston virtually shut down on September 23, 1912, as  100‚000 cheered the Red Sox returning from a western trip by train into South Station. So popular and so successful was the Sox that on the Boston Common, Mayor “Honey Fitz” Fitzgerald gave the team the keys to the city.

That 1912 team was loaded with talent, especially pitching. In addition to 34 game winner Joe Wood, Buck O’Brien and Hugh Bedient were 20 game winners.

Boston posted a home record of 57-20, .740 winning percentage. Winning a record 105 games, losing just 47, the Red Sox glided to the American League pennant. Their competition in the World Series was the Giants of New York. 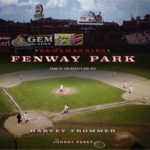 Additional wooden bleachers were in place in center and right-center. Seats on the slope cost one dollar, the same as for the left field bleachers.

The Boston Royal Rooters, Red Sox fanatics to the core, traditionally paraded on the field before games in step with the rhythms of a big brass band. Now, on the eve of Game One of the World Series, having traveled down to New York City, hundreds of them were accompanied by two brass bands. Led by Mayor Fitzgerald  and by “leading man”  “Nuff Ced” McGreevey, they marched around Times Square in Manhattan, singing to the tune of Tammany:

The word in the street was that if John J. McGraw’s Giants could beat Joe Wood, they could win the series. Before the opening game, Wood received death threats in letters postmarked New York. One, written in red ink and adorned with a drawing of a knife and gun, proclaimed: “You will never live to pitch a game against the Giants in the World Series. We are waiting to get you as soon as you arrive in town.”

But the 22-year-old right-hander who threw “smoke” was not the type to be intimidated. Pitching and prevailing, 4-3, in Game One at the Polo Grounds going the distance, striking out eleven Giants, Wood stood up to all challenges. After the game, he said: “I  threw so hard I thought my arm would fly right off my body.”

The Royal Rooters followed the team to the Polo Grounds and back to Fenway Park as the series alternated between both venues. On October 15th, as the Royal Rooters prepared to take their seats at Fenway for the seventh game of the World Series, they discovered their usual accommodations had been sold out from under them, a consequence of some box office confusion. The Rooters made up their mind that without them, there would be no game. Ignoring pleas that they leave the ballpark, their bands blaring “Tessie,” they remained in place until their “stay-in” was resolved by ranks of mounted police who swept across the field, nudging them out of the park.  One Royal Rooter, as disoriented as he was disenchanted, tumbled over the right-field fence on his way out and bellowed “To hell with Queen Victoria!”

The “Rooters” fumed and postured outside the park until they were presented with a compromise: they would be allowed to view the game from along the left field foul line.

Winner of Games One and Four, Wood was on the mound for Game Seven. But it was not his day. Seven of the first nine Giants in the first inning reached base – six of them scored. The Giants romped, 11-4. The series was knotted at 3 games each, one tie.

Game Eight was for the world championship — October 16th at Fenway Park. The Red Sox won the coin flip and were awarded the home field advantage. The riveting finale of the 1912 World Series would be played before a half-capacity crowd as a result of it being scheduled at the last minute as a makeup due to the Game Two tie, as well as the game-fixing rumors that swirled about and the Royal Rooters’ rhubarb.

Ace Christy Mathewson of the Giants, winless in this Series, after going the distance in the tie game and dropping Game Five, matched up against Boston’s 22-year-old Hughie Bedient.  The game was 1-1- after nine tense innings. Mathewson was still out there. Wood took over in the eighth for Bedient.

New York scored a run in the top of the tenth.  Boston pinch-hitter Clyde Engle started the home 10th by hitting a routine fly ball to center field.

“And now the ball settles,” The New York Times reported. “It is full and fair in the pouch of the padded glove of (Fred) Snodgrass. But he is too eager to toss it to Murray and it dribbles to the ground.”

Engle reached second base. Harry Hooper was robbed of a hit when Snodgrass made a nifty grab of his long drive. But Engle moved to third base. Yerkes walked. Speaker singled. Engle scored. And the game was tied. Duffy Lewis was walked intentionally, loading the bases. Third baseman Larry Gardner belted a deep fly ball to Josh Devore in right field. Yerkes tagged up and scored.

And the Red Sox had their second world championship.  Fred Snodgrass’ error would go down in history as “the $30,000 muff,” the difference between the winning and losing shares for the two teams in the series. And brand new Fenway Park was off to a glorious start.

One of the most prolific and respected sports journalists and oral historians in the United States, author of the autobiographies of legends Nolan Ryan, Tony Dorsett, and Red Holzman, Dr. Harvey Frommer is an expert on the Boston Red Sox having written three books on the team including the classic REMEMBERING FENWAY PARK from which some of the material for this article was taken.

A professor for more than two decades in the MALS program at Dartmouth College, Frommer was dubbed “Dartmouth’s Mr. Baseball” by their alumni magazine. He’s also the founder of www.HarveyFrommerSports.com. Mint, signed, discounted Frommer books are available from the site.