The New York Mets have taken their fans on a very bumpy ride this season. With their 5-3 win over the Phillies they clinched a home Wild Card berth. Mets fans have seen better and they’ve seen much worse. Some thought they were done. I never said that but I came very close. I saw them come back in too many games. I saw them overcome injury upon injury. That’s what a good team does. Now the question remains, are they a championship team?

This year’s lineup is one of the best they’ve had in recent memory. This is the second time in my  lifetime, and franchise history, that they’ve made the postseason in two consecutive seasons. They have a nice group of seasoned veterans and determined youngsters that has worked to perfection since August 20th. An MLB Best 28-12.

There’s time to look at Wednesday’s big game. For now fans should enjoy this. Seeing the joy on the players’ faces shows how tight this group is. Jay Bruce spoke on the radio after the game and he was so thankful. Even when fans were wondering if he’d ever start to hit his teammates never abandoned him. Now that he’s hot, he has cemented himself a spot on this team for this season and next.

Last night after the Flyers game Noah Syndergaard and Robert Gsellman spoke to a bunch of the local hockey players swapping war stories and talking about what’s next. Both pitchers were very “chill”. That’s something that has really surprised me. Gsellman, 23 and Syndergaard, 24, are very mature. Coupled with Bartolo Colon and those are the three pitchers the Mets have been riding down the stretch and now into the playoffs. Gsellman, has really had a knack of working out of jams. Like he did on Friday night. I was at that game as well and he shined pitching under pressure.

Fans of the blue and orange deserved yesterday’s outcome. Some came out in the rain Friday night and a lot more drove to Philadelphia to see the inevitable. Give Terry Collins and Sandy Alderson some credit, we can all have little problems with how certain things are handled but they continue to win. In the end that’s what matters.

One player who deserves a tremendous amount of credit is Jeurys Familia. After being largely unhittable last regular season he struggled in the World Series. He had 3 blown saves. That would have turned most closers into Armando Benitez. Not Familia, instead he got recorded a Mets franchise record 51 saves and counting and he’s the first Dominican-born closer to ever record 50 saves in a season. He’s the Mets rock. He’s the guy that has to shut down the opposition even when the Mets hitters have clawed their way back into games. He learned something from last year’s run. 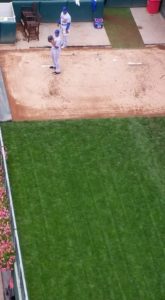