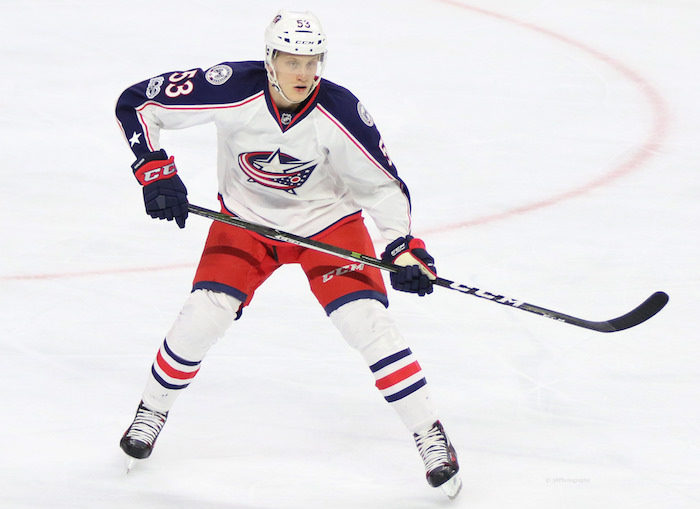 Philadelphia – – When you reach games 81 and 82 in the season a lot of teams will call up their prospects to reward them. Blue Jackets prospect, Gabriel Carlsson, got that treatment yesterday and he was paired with Seth Jones.

“It was a fun first game. Getting a feel for it. It’s a tough loss. Just trying to recharge and come back tomorrow,” he stated.

The tall, slender Swede was a -3. I’m not going to kill him and neither would anybody in the Blue Jackets locker room. For good reason, they are playing out the string and getting ready for the schedule to end and start the playoffs. Carlsson is just getting a taste but here’s what I did see.

In his 19:15 he skated well. He got the puck up the ice without issue. He was very comfortable in the offensive zone. He’s never played with Jones so it’s fair to say his second game with him should be better defensively. Having played just three games in Cleveland, this is his introduction to playing on North American ice.

“Of course, everything is different from playing in Europe. The ice is smaller. The guys are faster and are ready to take away the puck,” he added. “I played some games in Cleveland to get a feel for it. The pace is faster and the players on the other team are stronger.”

Carlsson is your modern-day shutdown defenseman. He skates, well, has a long reach, can move the puck well, will provide a hint of offense.

“Here you have better players to play with so that makes it easier as well,” Carlsson mentioned. “I’m more of a defensive defenseman. Win puck battles in my own zone and get the first quick pass up to the forwards. You can go from there and maybe get a little more offense.”

At 6-4, 192 he has some work to do to get stronger. He knows it and will work hard over this summer. Now 20, he knows the NHL is just around the corner.

“I’m young and can still get better and that’s what I will focus on over the summer.”

Considering he was drafted 29th overall in 2015, Columbus is bringing him along at the right pace.