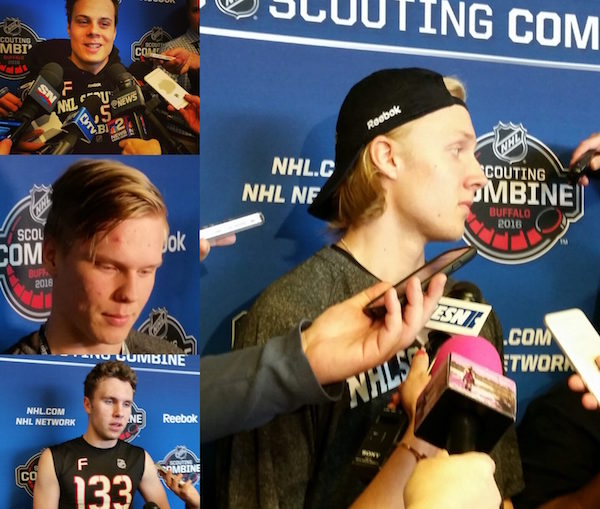 Buffalo – – I’ve waited a few days to digest the combine and give some deep thoughts that I have about some of the prospects.

1) Auston Matthews – He’s classy, he doesn’t say he’s the best, he lets his play do the talking. This is what sets him apart. He was the center of attention for sure.

2)   Alex Nylander – The left winger is already a rock star in Toronto and the Maple Leafs may never get a chance to draft him. The Canadian media loves him. I think he’s better than his brother, William but time will tell on that one.

3)   Olli Juolevi – The Finnish defenseman will be the most boring, terrific defenseman in this draft. There’s nothing flashy about this prospect but his talent is tremendous. He doesn’t need the best abs to be considered the best in this draft class.

4) Vladimir Kuznetsov – The “Russian Tank” looked fit, he answered every question. The problem was a lot of the media ignored him and not enough teams spoke to the talented right winger. Years down the road this will be looked at as a mistake. He really has something to prove.

5) Luke Kunin – He could have played in Sarnia but instead he chose to stay in Wisconsin. His talent is evident but the pivot may have had gained a few more profile points in the OHL since his NCAA squad had a bad season. Somebody will be getting a great player.

I heard some rumblings that players who are destined to be in the Top 3 may not take place in the combine going forward. The worry is about getting hurt. They have nothing to prove. What? How about this, they have something to prove to themselves. They’re competitors and at the end of the day they always want to be challenged. Most hockey players don’t duck out of competitive situations. They want to be the best and the best will test themselves in combines and games.

My last thought is the Harbor Center is an amazing place. The combine should be held there every year. It’s easy to get to and the facilities are perfect for the prospects and the media. I do think this should be televised more in the U.S. If you don’t want to watch then don’t watch. But for young hockey players it would be great for them to see these players giving it their all. For viewers who want to see the next generation stars before the draft, they should have that opportunity. SportsNet had it on. There is a way to do this and not have to show the entire day’s action.