You are here
Home > Hockeyology > The Morning After For Montreal

The Canadiens must have woken up with quite the hangover this morning, after last night’s mistake galore they find themselves on the brink of elimination and it’s time for Dominique Ducharme to find some solutions. The rookie coach has his work cut out for him, the Lightning is quite a well-oiled hockey machine, and the task looks almost impossible. Only once in history did a team down 3-0 in the Stanley Cup final manage to turn the tide and win the most emblematic trophy in hockey and it was the Toronto Maple Leafs back in 1942.

During his morning media availability, Ducharme had to field plenty of uncomfortable questions including one about the enormity of the task ahead:

“We spoke about that against Toronto, you must not look too far ahead. There are steps to get through. We’ve got a game to win at home and those who think we’ll just disappear just don’t know us. We’ll fight for the win on Monday night.”

Clearly, just like the fans, the members of the media are keen to see some line-up changes and when asked about the possibility of bringing Alexander Romanov in, Ducharme refused to commit to any changes for Monday’s game, yet in any case:

“I’m not worried about Romanov missing out, he played 55 games this season, he’s young, he’s still getting experience. He’s with us and we’re working with him. Too early to tell if there will be changes Monday, but we’re looking at every situation right now.”

When asked about the possibility of bringing Tatar back, the coach was once again non-committal:

“If I think I can have a better line-up with one of the healthy scratches, I will use him. We’ll see Monday, we’re looking at options and you’ll see Monday.”

For the head coach though, nothing is over just yet and he still has belief in his team:

“We don’t shy away from challenges, and we won’t again.” 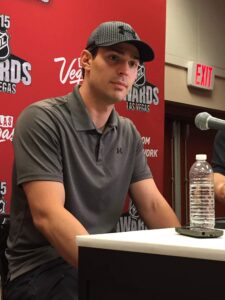 Price’s performance during the final was brought up and Ducharme was crystal clear, the franchise goaltender will be in net come Monday night.

For now, the Canadiens will practice for the next two days, and come Monday night, they’ll face the daunting challenge of trying to win 4 games against a team that is more talented and playing its best hockey.