Tommie Weatherspoon has three sons all playing basketball. Two of them Nick and Quinndary play for Mississippi State. The third, Brandon, is a high school senior, and he plays as well for Canton, Mississippi.

Clarence Weatherspoon, former 76ers star, is a coach for Southern Miss, no relation. Both of Tommie’s sons who played over the weekend in the “Never Forget Tribute Classic 2018” in the Prudential Center in Newark New Jersey, honoring the victims of 9-11. Their team was victorious. Both of them played a big part in the 82-71 win. Quinndary (6-4, 205) had a great second-half surge scoring 20 points and adding seven rebounds and five assists. He was a +21. His defensive skills are solid as well.

“I just took what the defense gave me. I knew they were going to try to take away a lot of my drives. I was open. I took some shots, and I was able to make them,” Quinndary stated. “We just try come out and play as hard as we can on the defensive end. We know if we can get a lot of defensive stops, it can push our offense, and we try to get out in transition. That’s what we like to do the most. We know, if we get some stops and get rebounds, we know we can get out in transition and have fun.” 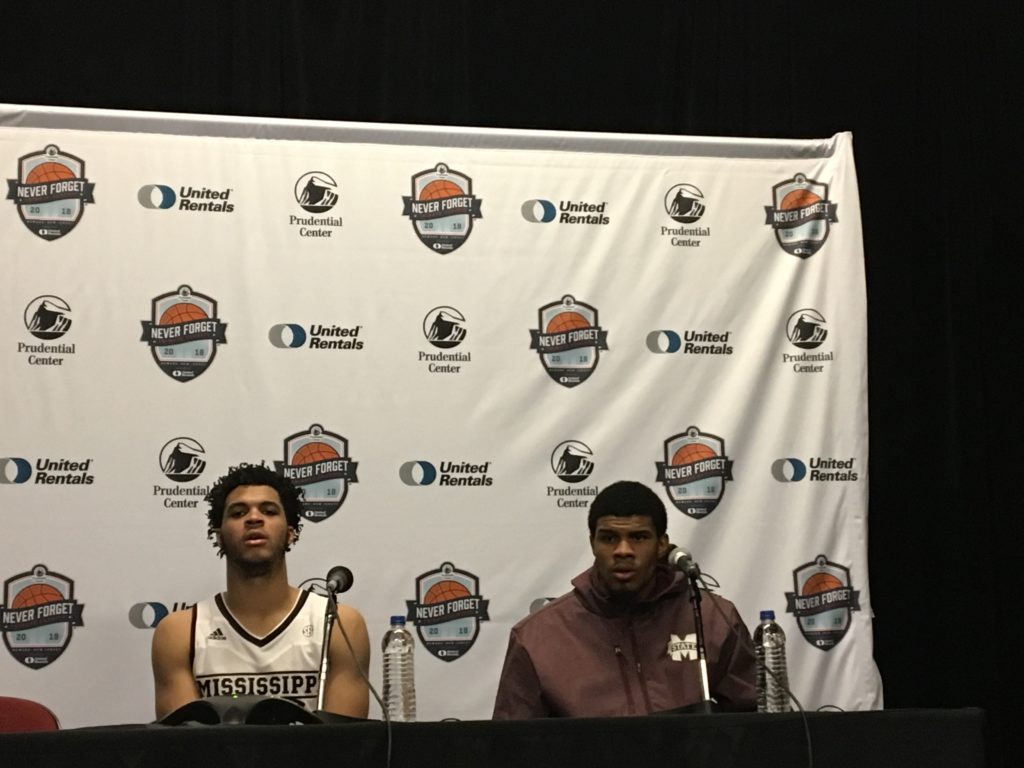 Nick (6-2, 195) only had two points but he did have five rebounds and six assists and was the point guard. He was a +7, third best on the team in that game. He does know how to dish it and he can bring the ball up the court quickly.

Both players weren’t drafted last season and Nick is a potential first-round pick depending on whose mock draft you’re looking at.

Teammate Lamar Peters (6-0, 185) stood out (pictured right). He was the best player in the tournament in my estimation. In that game, he shot 8-11 from three-point range and 9-13 from the field. He hit some clutch free throws and last-second jumpers. He had 23 of the teams 53 at the half and ended up with 28 points and five assists. He was passed over in last year’s draft as well.

“Yeah. It’s being able to deal with adversity, keep your composure. Basketball is a game of runs, so they’re going to make runs because they’re a good team, but at the same time, you’ve got to keep your composure and not get down. Just keep playing basketball the right way, and it paid off for us tonight,” said Peters.

Aric Holman (6-10, 225), a point forward, is another player showing up in 2019 Mock Drafts. He was a solid contributor in this game as well. He was 5-8 from the field and 5-8 from three-point range. He has a natural three-point shot and hit a few hard ones that weren’t completely open looks. He had six rebounds and 16 points. He was a +7.

In the second game, Florida State beat UConn 79-71. One player who caught my eye there was 7-4, 265 pound, Christ Koumadje. He had seven points, a career-high 11 rebounds, and four blocked shots. There were a lot of scouts in attendance who couldn’t have missed him! 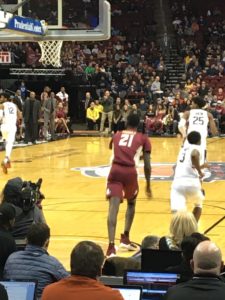 Read more about the event and the scholarship fund here: