Now that my final draft list is out and with the expansion draft coming up, I thought I would talk about what I think the Flyers should do in both instances.

As far as expansion, Flyers general manager Chuck Fletcher talked about what he did in Minnesota with the Vegas Golden Knights expansion draft.

“Everything is different. Our team in Minnesota was different,” Fletcher answered. “We had our pro scouts in town. We have more time to prepare, and our list is pretty straightforward. “

Will Fletcher make a deal to make sure Seattle selects a certain player like Jake Voracek.

“I’m open to either. I’ve had several conversations with Ron (Francis). Whether there will be conversations after we submit the list, time will tell.”

As far as trades before the expansion draft, Fletcher was open about what’s going on.

“The phones have been busy. We’ve all been speaking with each other,” Fletcher revealed. “It seems like more teams prefer to wait after Seattle makes their decisions. We certainly aren’t going to be making a trade today or tomorrow unless some unexpected happens.”

Fletcher has been in contact with players who will not be protected.

“I’ve had conversations with a couple of them and the likelihood. I will reach out to some of the players for sure for a courtesy. I don’t want to jump the gun,” said Fletcher.

I think Seattle will take Robert Hagg if they select off the list. He can do more than he’s had the chance to do with the Flyers, and his salary is desirable. If they want to flip him at the trading deadline. 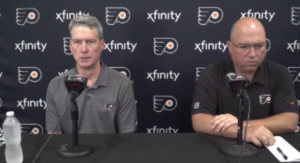 As far as the draft goes. Here is what the Flyers said about that.

Brent Flahr runs the Flyers draft, and he talked about their strategy. Would they draft a goalie that was at the top of their board?

Fletcher did throw out a Hail Mary hoping to get a few more calls before the expansion draft and before the entry draft.

“This offseason, I’m more willing to move it. If it helps us long term and that involves the pick, I’m certainly willing to do it.”

Strategy-wise I don’t think the Flyers should look at who is falling. If a player falls this year, it’s probably for a good reason meaning something they found out about while going through the interview process or the general vetting of players medically and otherwise. If they can get Cole Sillinger, that’s a center who can do a lot of things and will play in the NHL. A safe pick. Chaz Lucious is another player the Flyers could use because he’s exceptionally good around the net and creates offense out of defense. Zach Dean is another center who is a goal scorer and a playmaker.

I think the Flyers will try and make a draft-day trade to move up. I got that vibe. Maybe that’s a part of a bigger deal where NHL players move too, I can see that being talked about. Let’s see what happens.