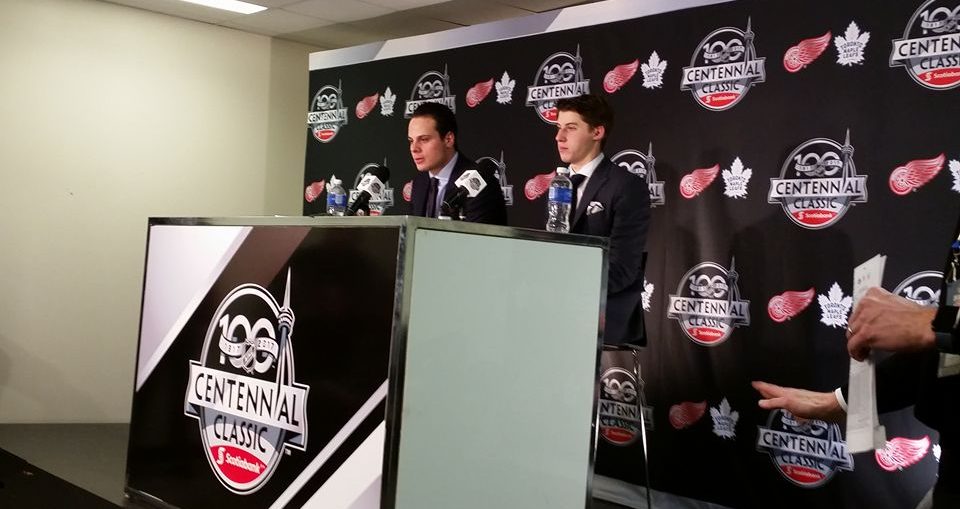 Toronto – – Many complain that the NHL doesn’t do enough to promote the great young players of the league. In this game one of the leaders for the Calder Award, Auston Matthews got two goals (19, 20), one was a game-winner and Detroit’s Anthony Mantha got three points. The Leafs got an exciting 5-4 win in overtime and the hometown fans went home happy.

Anthony Mantha opened up the scoring in the Centennial Classic. The 6-5, 221 pound left winger was rewarded for some great shifts. That was his 8th goal and 14th point this season so far. Many were talking about Mantha before this season wondering when it was all going to click for the 22-year-old. The truth is as a bigger player, it takes longer for them to put it all together. He already had speed and strength but he didn’t have a 200-foot game. He has five goals in his last four games.

The fact of the matter is in his first 32 NHL games he has 10 goals. That’s excellent production. Playing on a top line with Henrik Zetterberg and Tomas Tatar helps and the fact that head coach Jeff Blashill seems comfortable using him says something.

Mitch Marner got a strong goal by finding some space on the ice down low. He whizzed around a few players, and even on some rough ice, he found a seam and got a nice goal, his ninth. He’s another rookie having an impact.

Connor Brown, another rookie, roofed his goal as the Detroit defense was seemingly breaking down in that 1:11 two-goal span. Brown is from Toronto and the crowd went crazy when he potted his 7th of the season. The Leads were up 3-1.

Auston Matthews added a nice goal of his own with a great feed from Brown at 12:05 of the 3rd period. At that point the Leafs had a dreaded three-goal lead.

The Red Wings got on the board when Jonathan Ericsson and Dylan Larkin scored from down low with the Detroit’s 30th shot on goal. At that point it was a 4-3 game.

Mantha got his second goal with 1.1 seconds to go in the game to tie it up 4-4. It was a strong shot from the slot with a ton of traffic around Leafs’ goalie, Frederik Andersen.

In the second period 7 goals were scored and the Matthews OT-winner made 8. That has to be an outdoor record.

The Game Within The Game

Matt Martin fought Steve Ott. Both players grew up in Windsor, Ontario. Ott was very animated in the penalty box but Martin didn’t bite at his antics.

“Listen, he’s from Windsor, I’m from Windsor. He’s done that for his whole career. He’s been in the league for a long time. That’s his role. That’s his job. It is what it is,” said Martin. “That doesn’t matter to me.”

In 2014, the Winter Classic was at the Big House in Michigan. Zach Hyman at that point in his career was in the midst of his third season at the University of Michigan. At that point he was an unsigned prospect who was drafted by the Florida Panthers. Three years later he’s getting two points in a huge outdoor game and that wasn’t lost on him.

“As soon as you step out there, some games you are tired, not in this one. You have 40,000 people, the cold air, and the atmosphere. You’re ready to go. There’s no way you’re not ready to go for a game like this,” said Hyman. “It was a lot colder in the big house. I remember my toes being frozen just watching the game. I was a fan. Big Leafs fan, obviously. It’s wild. The other day it popped up on Facebook, the day I was watching the game at the Big House. Wow, it’s really cool. My brother sent it to me because we were both there. Who would have thought…You’d never guess I’d be playing for the Leafs, three years later in the Centennial Classic.”

That’s the beauty of hockey and this is why players love to play in the outdoor games.