You are here
Home > Hockeyology > 10 Flyers Thoughts on Game 4

The Philadelphia Flyers defeated the Montreal Canadiens 2-0, taking a three games to one series lead in their Eastern Conference Quarterfinals Series. Here are some observations.

“No,” Vigneault said. “Nate’s a good faceoff guy. Raffy and Tyler were good forecheckers. I just thought that first faceoff of the game, let’s just try to get in deep and get our forechecking game going. We made a few little subtle changes to our lines. At the end of the day, the game is still about hard work and executing.

“Both teams right now are battling extremely hard. I thought that obviously getting that first goal and getting some big defensive plays like blocked shots and good second efforts on our part enabled us to stop Montreal who’s a high speed and skill team.”

The van Riemsdyk scratch didn’t come as a massive surprise. If you’ll recall Game Three’s 10 Flyers Thoughts, his performances practically warranted it. Whether he’ll be back in the line-up for Game Five remains to be seen. If JvR isn’t scoring, he has to contribute in other ways. Considering he wasn’t an answer for the power play’s continued struggles, it pretty much became the only option, at least for this contest.

Aube-Kubel had absorbed some Montreal rockets while shot-blocking in Game Three, most notably a Xavier Ouellet blast off the toe of his right skate late in the contest. The rookie forward has done a good job playing on third-line right wing with Grant, providing aggressive forechecking. 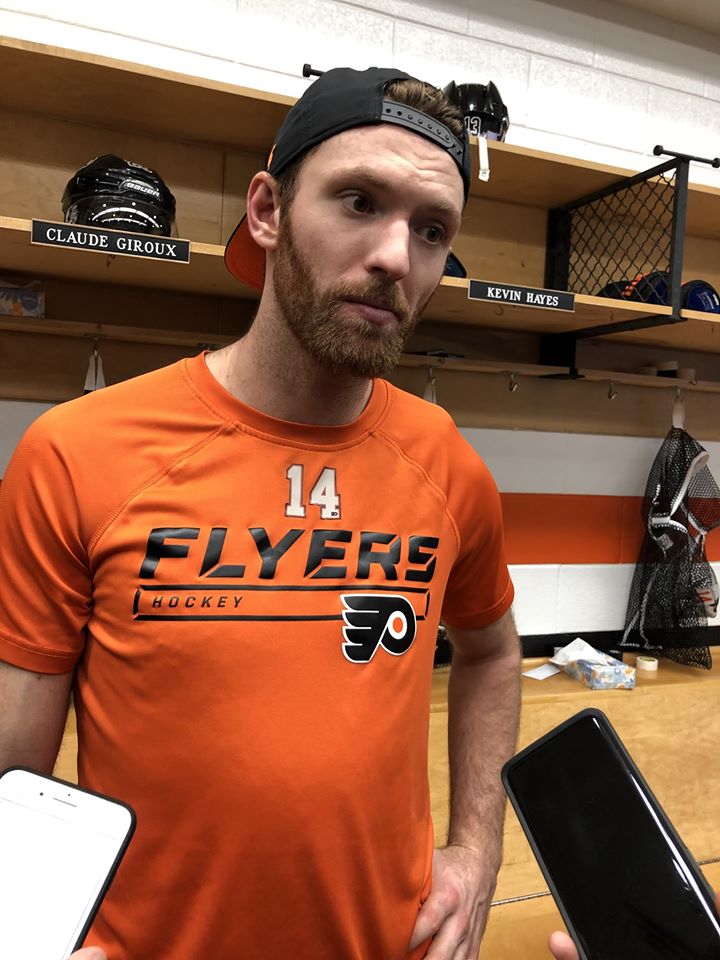 “I was just trying to put it on net,” Myers said. “I think it was Kulak there who was trying to get a stick on the puck. I just tried to avoid his stick and put it on net. Got lucky and got a good bounce. I’ll take it.”

It would prove to be the backbreaker for the Canadiens who had a stronger second period but had nothing to show for it.

“There’s no doubt that Carter’s a huge part of this,” Vigneault said. “We’re not playing perfect hockey. Without out a doubt, when we do make mistakes, he’s been able to get that big save for us.”

As Raffl, a fellow Weber shot blocker said, “If you can, maybe break up the play before that. I can’t say it’s a lot of joy or fun jumping in front of that bomb. Got to be smarter a little bit before if you can. If not, you have to eat it.”