You are here
Home > Hockeyology > 10 Flyers Thoughts on Game One

The Philadelphia Flyers defeated the Montreal Canadiens 2-1, in Game One of their Eastern Conference Quarterfinal Series. Here are some observations.

“I’ve gotten to know Carter,” head coach Alain Vigneault said. “I’ve got to know how he sees the game and handles a situation. He’s been through big games before and he’s played well. He’s just going out there and doing what he’s supposed to do, giving us a chance to win games. 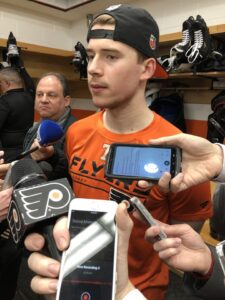 “He’s been great for us,” Ivan Provorov said. “It’s his first playoffs, but it doesn’t look like it. He has poise. He’s been making plays. He’s been scoring and helping us big time. I think he deserves to play on that line and he contributes a lot. He’s been going. I think he complements Coots and G very well.”

“I think they gained momentum,” Couturier said. “That’s playoff hockey. Momentum is going to change sides here and there. The important thing is just to respond and get it back as quick as possible. I thought we came out stronger in the third and played better. You have got to give them credit. They’re a good team. It’s not always going to be in our favor. We just have to battle through it.”

Check out my new hockey book Sticks and Stones here. We feature Shayne Gostisbehere in the book!: